Although commercial development of coffee in Bolivia began in the 1920s, today the country contributes only a tiny fraction to the world’s supply. Roughly 95 percent of Bolivia’s coffee is grown in the Yungas, a fertile region on the eastern slopes of the Andes northeast of La Paz (one of Bolivia’s two capitals). The Yungas possesses many of the essential conditions for growing excellent coffee, including extremely high elevation and reliable wet and dry seasons. However, Bolivian coffee suffered from a poor reputation in the past due to problems with transport and production methods, and frequently received a low price as a result.

Adding another layer of complexity is the geography and under-developed infrastructure of Bolivia, which has historically made the production and export of coffee a challenge. Coffee cherry collected in the humid Yungas valleys had to travel along high mountain passes to reach processing plants in La Paz and onward to the seaports in Chile or Peru, a long journey that resulted in extreme variations in temperature that were detrimental to coffee quality. The most infamous of these roads was the “Camino de la Muerte” (Road of Death) which at its high point reaches in excess of 15,000 feet.

In an effort to combat these challenges, USAID collaborated with the Bolivian government by launching a program in 2001 to showcase the region’s ability to produce high-quality coffee and to present farmers with an alternative to coca production which has been prevalent in this region. Wet mills were built in the Yungas so the moisture level of the coffee could be brought down prior to shipment over the Andes. Coffee production and quality increased significantly in the following years, and things were again made easier for coffee producers when a new route bypassing the Camino de la Muerte was completed in 2006. The Bolivian Coffee Association (ACEB) and the Cup of Excellence competitions also put a great deal of work into increasing quality awareness in Bolivia. While challenges still exist, Bolivia has come a long way in terms of quality and we continue to be amazed by the wonderful specialty coffees the country is capable of producing. 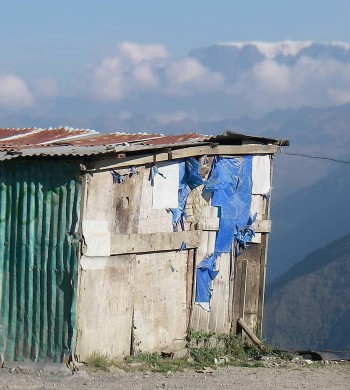