Colombia is a country of exquisite coffees and stunning natural beauty. We returned to Huila, Colombia in the fall of 2019 for the 10th annual “Lo Mejor de Monserrate” micro-lot cupping competition and to visit with our friends at ASPROTimaná. We then headed to visit with ASOPEP, a group of producers accomplishing amazing things in Tolima. Finally, we traveled to a coffee producing region we had never visited before in the northern department of Bolívar.

Atlas has been visiting ASPROTimaná for many years and each time we return, we find the group has evolved in many encouraging ways. Their completed warehouse is a marvel of organization and efficiency. It’s hard to believe that only a few years ago, producers delivered their coffee to what amounted to a large tent on a cement patio.  They have a new quality control team made up of very bright young people from coffee producing families. During our visit to the warehouse and quality control lab, they expertly organized a cupping of many delicious coffees from ASPROTimaná producers. 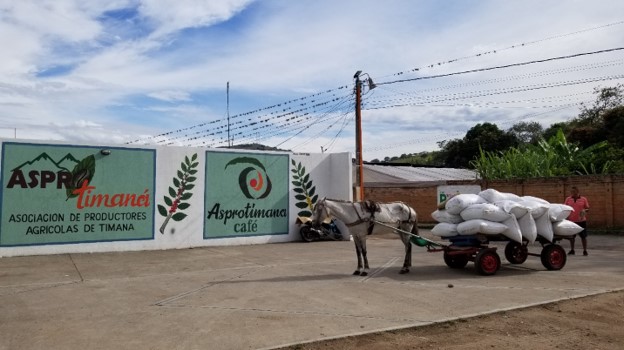 Coffee being delivered to the ASPROTimana warehouse

We visited several farms during our two-day visit. We saw that some producers are experimenting with extended fermentation times and many were precisely measuring sugar content and acidity. Brix and pH meters were used at every farm we visited. We learned that for brix level, they consider 20 to be ideal. This is measured at various stages prior to the harvest. When a majority of cherries reach this point, harvesting begins. 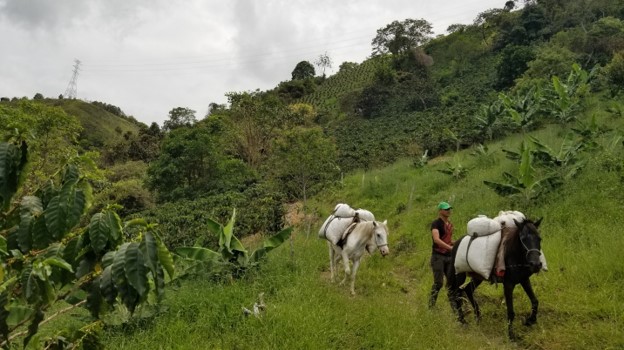 After the cherries are collected, they can remain in the holding tank for up to 36 hours (depending on ambient temperature) before being pulped. After pulping, the pH is measured throughout the fermentation process. When the pulped coffee reaches the ideal level, it is washed, halting fermentation. 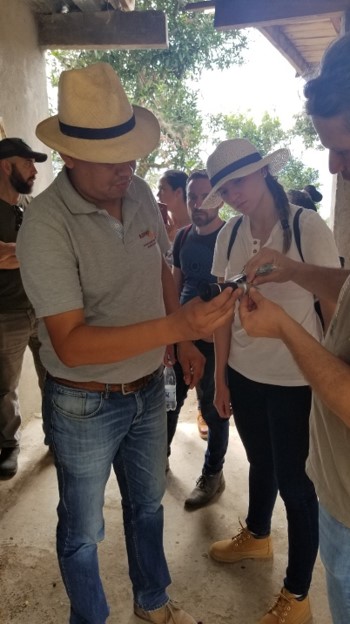 The cooperative’s leadership provides training for its members and ensures they have access to brix refractometers and pH meters for use on the farm. ASPROTimaná is working on standardizing their fermentation process based on farm altitude. These measures help to create a high level of consistency which contributes to the exceptional quality of ASPROTimaná´s single producer micro-lots.  That same consistency makes it possible for the group to repeatedly produce full-container volumes of very high scoring blends every single year.

After two wonderful days in Timaná, we drove to the city of La Plata where we promptly began the 10th annual “Lo Mejor de Monserrate” micro-lot cupping competition. We cupped 60 samples over several days with many familiar names showing up on the list of finalists. 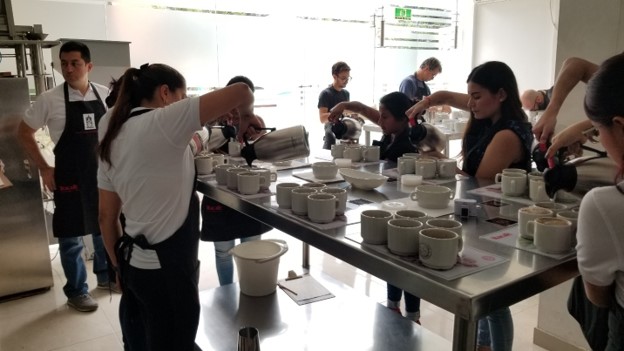 Due to security issues near the Huila/Cauca border, we were not able to visit the town of Monserrate this year. Instead, the entire competition took place in La Plata with Producers and their families coming down from Monserrate for the awards ceremony. Nora Nelly Pillimue is consistently on the list of finalists and we were thrilled to see her win the competition this year. The coffee from Nora’s farm blew away our judges with its grapefruit, guava flavors and vanilla sweetness along with sparkling acidity and heavy body.

Conditions for Monserrate producers have vastly improved over the years. Thanks to the micro-lot competition, many farmers have forged relationships with roasters that have endured nearly a decade. During a prolonged period of low C-market prices, producers in Monserrate benefited from higher outright pricing rather than a receiving differential on top of the prevailing market price. A COSP (Cost of Sustainable Production) study was performed by our exporting partner Racafe with help from the non-governmental organization Solidaridad to determine producer’s costs of production and point of profitability.

Additionally, with help from generous roasters, the Monserrate Development Fund was started in 2018. Roasters agree to pay a premium on top of the usual price with proceeds from those premiums going to pay for important social projects in the community.

In the first half of 2019, the first major project was completed. In total, 23 farms received upgraded water treatment along with compost pit improvements. Additionally, 5 farms had new septic tanks built. Studies are underway to determine what the next development project will be. Thanks to strong producer-roaster relationships, great things are happening in Monserrate. 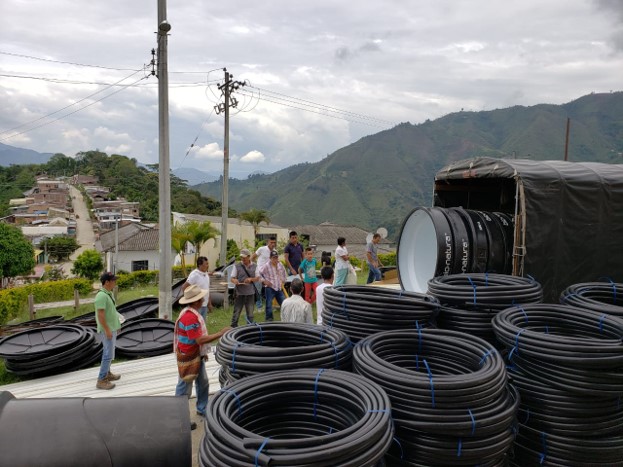 Situated roughly 230 miles from La Plata, Planadas is a rural municipality in the department of Tolima. It’s a full day of driving along winding and bumpy roads to reach Planadas but the trip is always well worth it. It’s a place of surreal natural beautiful that also produces some of the most amazing Fair Trade and Organic coffee Colombia has to offer.

For decades, coffee producers in Tolima were cut off from international markets due to the violent struggle between the FARC (Revolutionary Armed Forces of Colombia) and Colombia’s central government. While other neighboring regions became known for coffee, Tolima’s coffee producers found themselves isolated. The conflict subsided thanks to a 2016 peace accord between the FARC and the government allowing Tolima to finally highlight its immense potential for producing specialty coffee. ASOPEP is currently the largest associations of producers in Tolima and arguably the most visible in promoting the region’s coffee producers to the world. 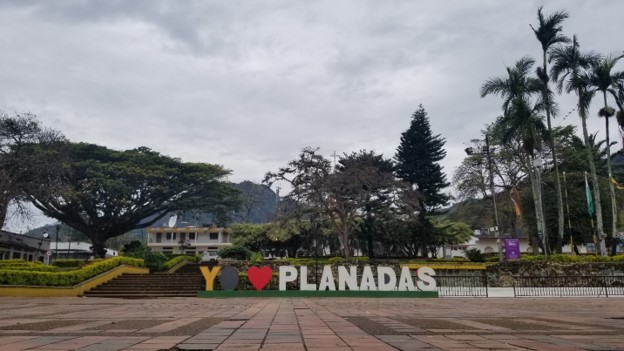 The central plaza in Planadas

After our long trek from La Plata, we arrived at ASOPEP’s coffee school on the outskirts of Planadas. We were greeted by the sons and daughters of ASOPEP members who expertly prepared some much-needed coffee for us using a variety of brewing methods. ASOPEP has an exceptionally effective youth program that provides training in quality control, barista skills and business management. Thanks to ASOPEP’s programs, young people in Planadas increasingly see a viable future for themselves in coffee. Roughly 30% of ASOPEP’s members are between the ages of 20-30 years old.
The next day, we began our much-anticipated farm visits. The first farm we visited was 30-year-old producer Jorge Rojas’ “El Jardin.” When we first met Jorge a few years ago, he was an up and coming ASOPEP member just getting his start. We returned to his beautiful organic farm and it was great to see the success he’s had in such a short time. 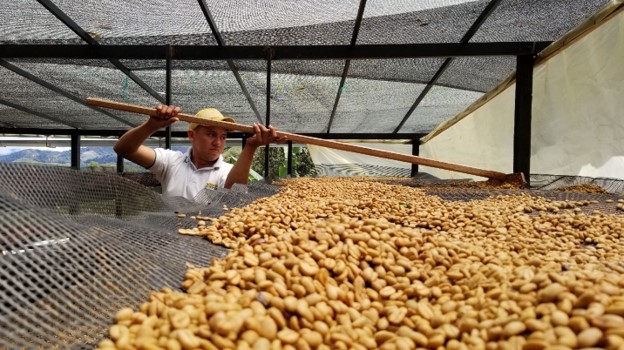 Jorge is one of 52 "millennial" producers in ASOPEP. He inherited the 3-hectare farm from his father and through his exacting post-harvest practices, he is making a name for himself internationally for producing exceptional quality washed, natural and honey process micro-lots.

Thanks to strong support from the cooperative, other young producers are finding success the way that Jorge has. ASOPEP is growing and flourishing thanks in large part to this new generation of coffee producers that are innovating and finding ways to push the boundaries of coffee quality.

Santa Rosa del Sur in the northern department of Bolivar is an isolated municipality not connected to Colombia’s main road network. It can be reached via 6-hour boat ride up the Magdalena river or by chartering a flight. On this occasion, we opted to charter a small plane from the nearest city of Bucaramanga.

In 2016, USAID began a development project in Sur de Bolivar and partnered with a local cooperative of coffee producers called ASOCAFE. The Coffee for Peace project aims to train producers in good post-harvest practices through a “Micro-processors Certificate” program.  Based on standards taught in the Coffee Quality Institute’s “Q Processing” courses, the Micro-processors Certificate program was developed by Boot Coffee and Fintrac, a women-owned US-based consulting company. Through this 25-point training program and a rigorous on-site quality auditing process, producers have been able to dramatically increase quality.

In many ways, Bolivar and the municipality of Santa Rosa del Sur have parallels with Planadas in Tolima. Coffee producers have existed there for many years but have been cut off from export markets due to political turmoil in the region. Like Tolima, there has been a long history of illicit crops such as coca. By giving producers a viable alternative to coca, the program aims to develop the local economy and lift individuals out of a cycle of poverty. 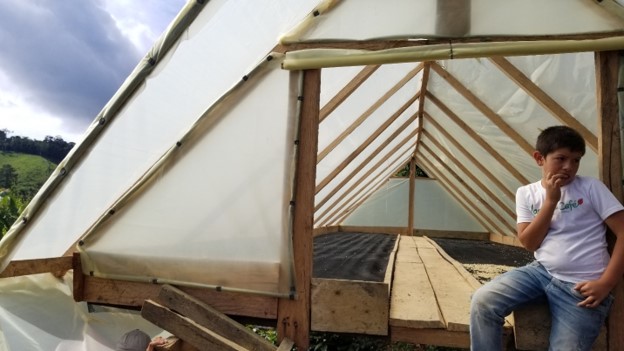 In 2019, we completed a COSP study with help from Fintrac and our exporting partner Racafe and determined a price that will allow producers to profit and invest in the future. Proper drying infrastructure and equipment is limited in the area. In response, Atlas is including a premium this year on top of the FOB price that will help pay for additional solar dryers.

Our next lot from Sur de Bolivar is slated to arrive in April on the West Coast so look out for it on our offering list!