The What, the How and the Why of Indonesian processing methods

The What: Wet-hulled Indonesian coffee is unlike any other in the world, and it’s precisely this unique style of processing that can make them so attractive. Coffees from this region, and particularly from the islands of Sumatra and Sulawesi, are known for their heavy body, lower acidity, and often rustic or earthy flavor notes. These unique flavors can be attributed to the traditional wet-hulled processing method that is widely used across Indonesia. While much of the coffee we buy here at Atlas fits into the classic flavor profile mentioned above, we also work with several cooperatives who produce coffee that is incredibly clean, bright and full of fruit, while still maintaining a touch of the Indonesian profile most of us have come to know, and many of us have grown to love.

The How: Wet-hulled coffee (not to be confused with wet-processed or washed coffee) removes the protective parchment from the bean at a higher moisture level than washed or dry hulled coffees, typically between 40-45%, depending on the individual processor and region. "Wet-hulled" in Bahasa Indonesia is translated as "Giling Basah," a term used mostly by exporters but not often by the individual producers themselves.

From cherry to green exportable, the chain in much of Indonesia looks this way:

Cerry Merah: Small-holder producers harvest “Cerry Merah” from their individual plots of land. Once cherry is harvested, it is sold to a local collector. If the producer is part of a well-established cooperative, the collector is usually also a producer belonging to the same group. Because the internal market in Indonesia tends to be quite volatile, competition for cherry can be fierce. There is a local market in coffee producing areas where collectors often compete with one another to buy cherry or wet parchment. The use of cell phones in the past decade has made communication incredibly easy and some collectors learn daily pricing through a WhatsApp chat that can involve 50 or more people. 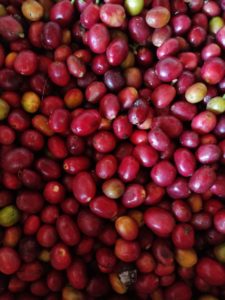 The unit of measurement for buying and selling coffee at this stage is a standardized volume measure called a "Bambu", a volumetric measure of 2 litres (or +/- 1.2 kg). Next the coffee will be depulped. Some of these producers have their own hand cranked depulper or share with a nearby neighbor, while other producers bring their cherry to the home of their collector, who has a centralized depulper. Depending on the level of quality, cherry may be floated prior to depulping. Floating coffee is most prevalent in North Sumatra and Aceh.

Gabah Basah: After the coffee is depulped it goes through a fermentation process. Once again, this can happen at the producer’s home or at the home of their collector. Tanks can vary in size and shape, ranging from a circular plastic tub or plastic gunny bag, to a more permanent cement basin. Fermentation times also vary, depending on temperature and elevation, but generally will undergo a minimum of 8 and maximum of 18 hours. Fermentation helps to break down sugars and mucilage, which is then washed off. At this stage (after fermentation and before wet-hulling), the wet parchment coffee is called “Gabah Basah.” Moisture content at this time can range from 40-50%. Before wet-hulling, Gabah Basah is briefly dried on patios or tarps to lower moisture. 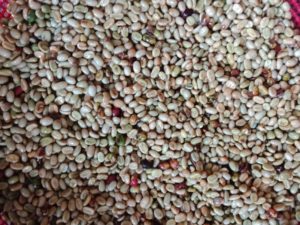 Labu: At this point, the collector sells and transports gabah to the cooperative, miller or exporter, which may all be one entity in some cases. In other cases, they may all be separate organizations that function independently. The miller owns the equipment, specifically the wet-huller, which is needed to remove the parchment from the bean. Because the bean is very malleable and fragile (due to its high moisture content which is still around 40%), this machine differs greatly from a traditional dry-huller both in design and size. It is specifically manufactured for processing wet parchment and works to remove the parchment layer through the friction of two rubber paddles that rub against one another. Once the parchment is removed, the coffee is called “Labu.” 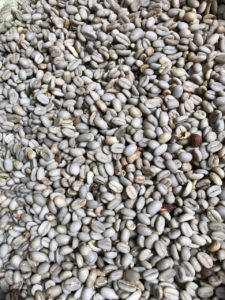 Asalan: Labu is then laid to dry on patios, tarps, or roadsides, depending on the quality of coffee being exported. Since it is now without its parchment layer it can dry to export specs rather quickly, especially in full sun. At this stage, it is referred to as “Asalan.” Contrary to popular belief, Asalan is not defined by moisture content (although it is typically between 18-25%). Literally "Asalan" translates to “anything and everything” and describes coffee that has not yet gone through any cleaning or sorting. Preparation of coffee to export grade happens at the mill or exporting facility, which once again may be the same entity or separate.

Redy Ekspor: Once asalan has been cleaned and dried to a maximum of 13%, it is now considered “Redy Ekspor.” Yes, nearly English, Redy Ekspor is the term used my most exporters. Depending on the contract specifications, coffee can be sold as two types:

DP: Double Picked - sorted once by machine, and once by hand.

TP: Triple Picked - sorted once by machine, and twice by hand. 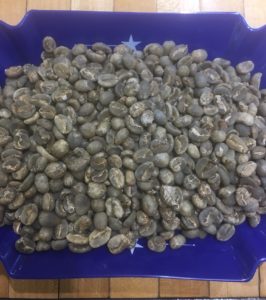 Coffee in Indonesia (and most countries) is a cash crop, and coffee in general is a hot potato. Those directly involved want to quickly pass coffee along to the next person in the supply chain so they can be paid. Because wet-hulled coffee takes less time to dry, individual producers (as well as collectors) are able to reap the financial rewards much more quickly by selling the coffee as soon as it's hulled.

Climate and geography also play a role. Because Indonesia is comprised entirely of islands, the coast is never far away, even at higher altitudes where coffee is grown. Rainfall and humidity are both quite high across Indonesia which complicates the drying of coffee. Removal of parchment helps the coffee to dry quicker in an environment where rain is prevalent and becoming more and more unpredictable each year. Unlike most countries that have a pronounced wet and dry season, most of Sumatra has unpredictable rainfall. Whereas farmers could once predict weather patterns and during which months of the year it would rain, we’ve heard from producers across the island that it can now rain at any moment, at any point in the year. This makes harvesting that much more challenging and drying coffee even more so.