Some of Atlas’ longest standing relationships are in Nicaragua and Honduras. These two countries produce an incredible diversity of flavor profiles from both small-holder farmers and estate-owners. The producer groups we’ve partnered with are always a treat for us to visit, and March is usually a great time to both see coffee processing and cup the early harvests from the higher-elevation farms.

Starting in Nicaragua, our first stop was the town of San Juan del Río Coco, department of Madríz. There we spent a day with UCA San Juan del Río Coco, an association of seven base cooperatives producing some of our favorite Fairtrade and Organic certified coffees in Central America. As we’ve seen with many coffee cooperatives, certain individual farmers in San Juan del Río Coco have risen to prominence as models of best practices in the community. We spent our day with two of these model farmers, René Fernández (from base coop Altamirano) and César Gonzáles (from base coop Carlos Fonseca.) Both farmers are forward-thinkers , and produce compost and honey on-site, as well as a plethora of fruits and vegetables in addition to coffee to diversify their income. 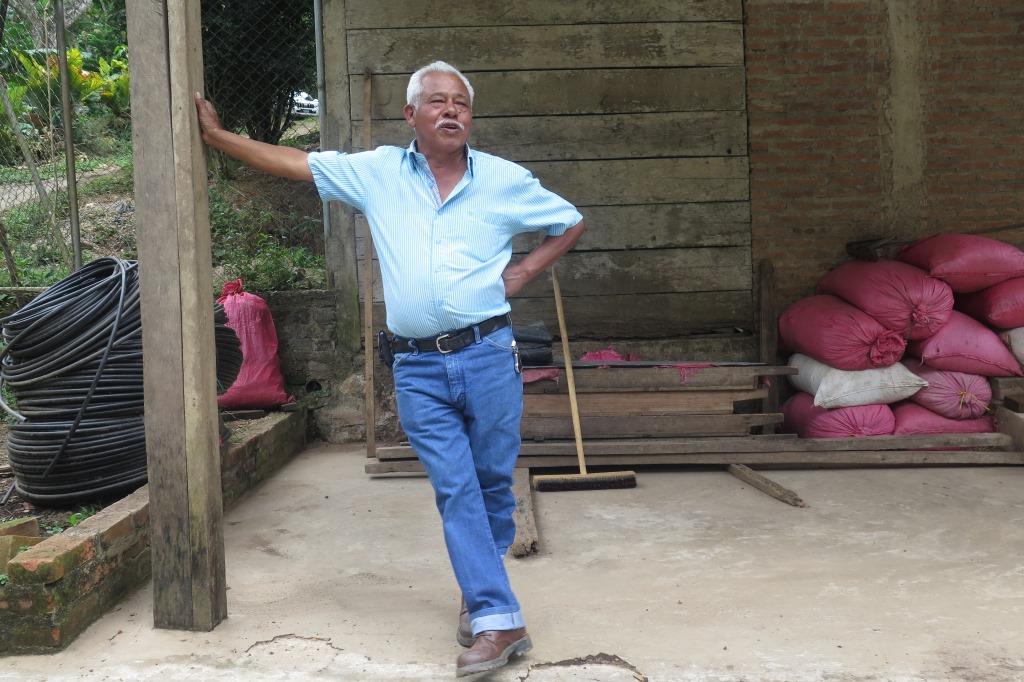 The “UCA” is a union of coffee farming cooperatives – Unión de Cooperativas Agropecuarias – and General Manager Griselda Lopez is a terrific advocate for the farmer members. Much of the innovative ideas we see on the individual farms stem from the vision of Griselda and her family.

After a fantastic day with UCA San Juan del Río Coco we moved north to the town of Ocotal (department of Nueva Segovia) to spend a few days with our producer partners at Beneficio Las Segovias. Luis Alberto Balladarez is the owner and manager of the beneficio, which processes and exports the majority of the Nicaragua micro-lots Atlas buys each year. Luis Alberto owns a number of farms himself, and his Un Regalo de Díos, La Esperanza and La Bendición make regular appearances on Atlas’ offer lists. 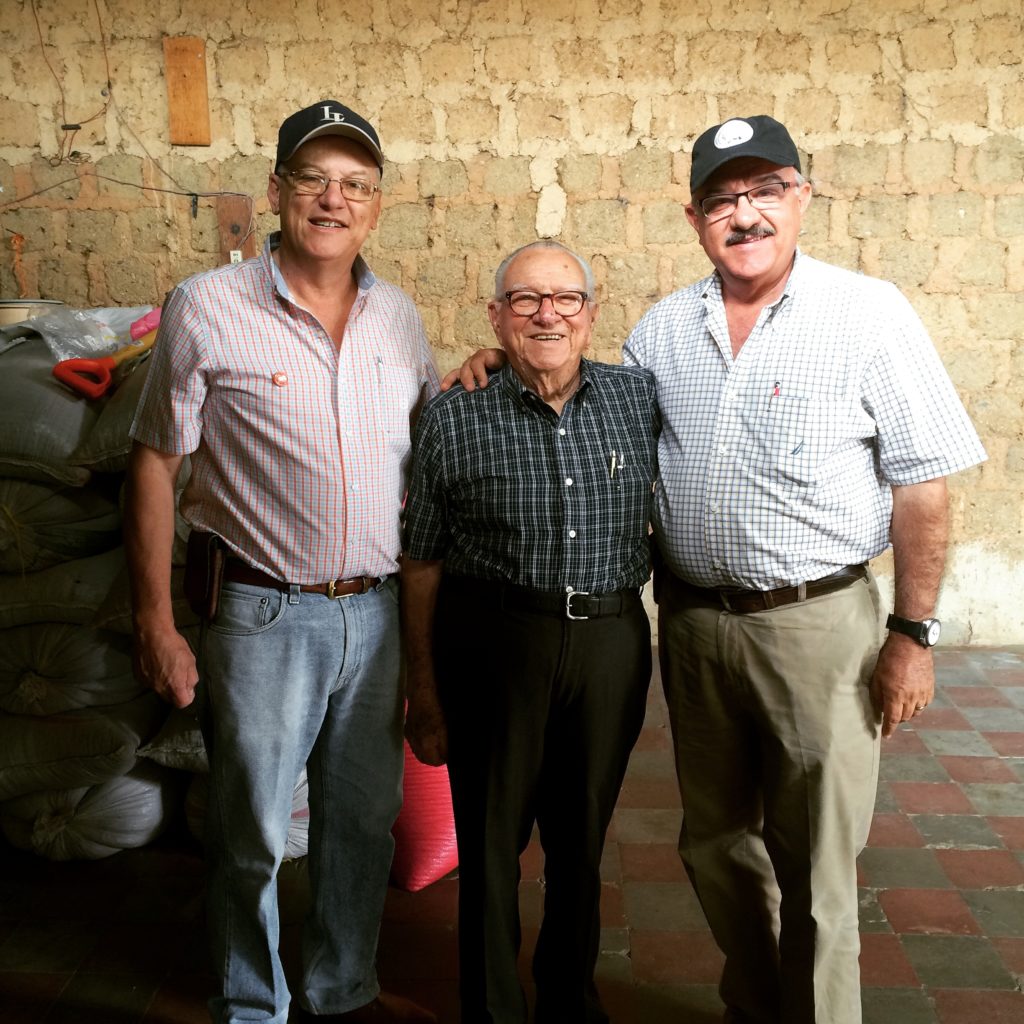 Luis Joaquin Lovo and his brother David Ariel own three farms with their father Joaquin Augusto: La Pradera, Bella Aurora and Santa Teresa. The Lovo family also operates their own dry mill located in their family home right across the street from Ocotal’s central park. The three Lovo family farms are in Dipilto, just a stone’s throw away from Nicaragua’s northern border with Honduras. Less than 30 minutes from Ocotal, the Lovo farms are very close to each other, less than a mile apart as the crow flies. We’re always impressed by the diversity in flavor profiles between the three farms, considering the similarities of micro-climates, processing methods and plant varieties. 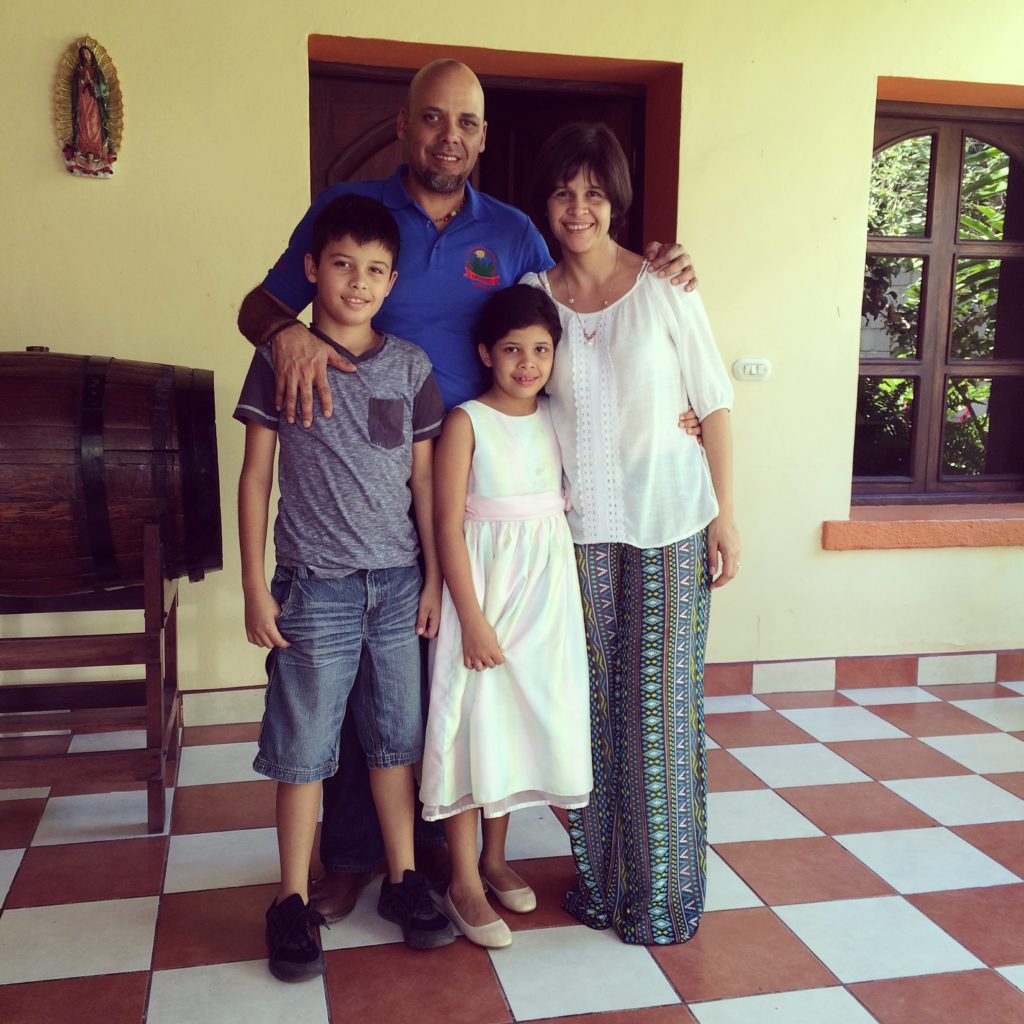 Mario Vilchez is another rock-star farmer that Atlas is proud to call a partner. Mario added a fourth small farm to his group this year, La Excelencia, joining Santa Gema, La Escondida and La Santísima. Mario’s attention to detail and quality at all levels of production is unwavering, and his coffees are some of the most dynamic we’ve seen from the area. This year Mario also added a small drying patio behind his home in Ocotal, in order to personally manage some small processing experiments. 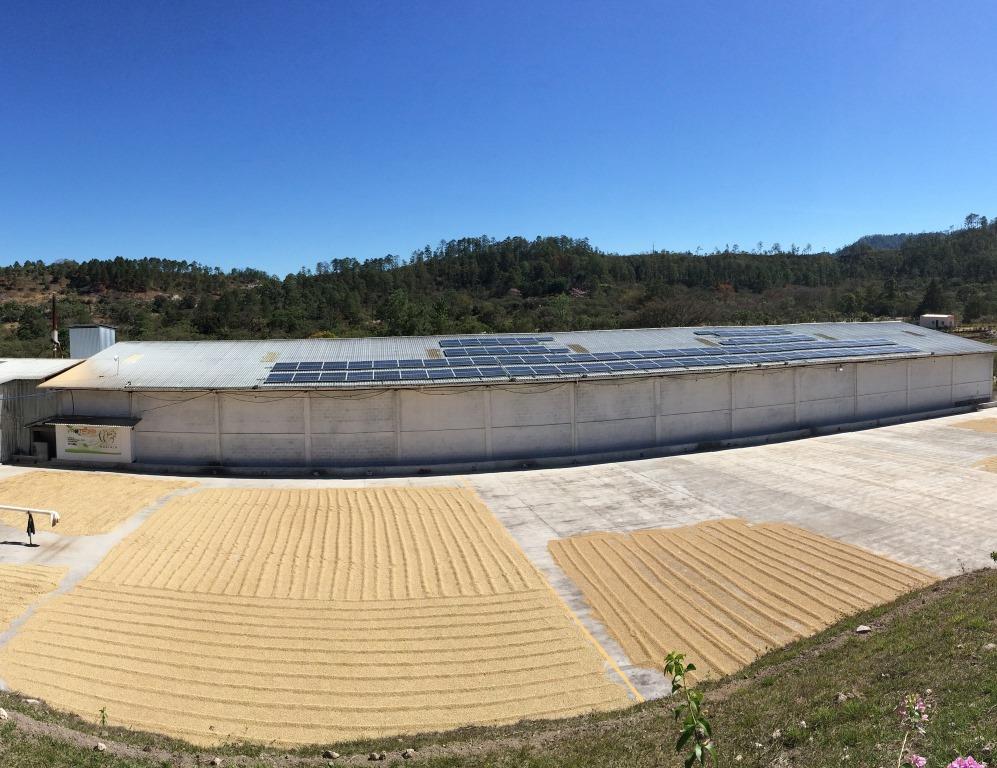 Heading west across the Las Manos border into Honduras, we crossed the country spending a night in Tegucigalpa before landing at Finca La Fortaleza in Marcala. La Fortaleza is the pride and joy of COMSA, an association of organic farmers around the Montecillos mountain range. At La Fortaleza the brilliant farmer/educators of COMSA host groups from all around the world to teach their unique philosophy of sustainable agriculture. These innovative methods enable coffee farmers to produce their own fertilizers and treatments for plant fungus and pests, using components readily and economically available. Participants also learn how to grow their own produce for food security and supplementary income, and good stewardship of nature is at the core of every lesson. 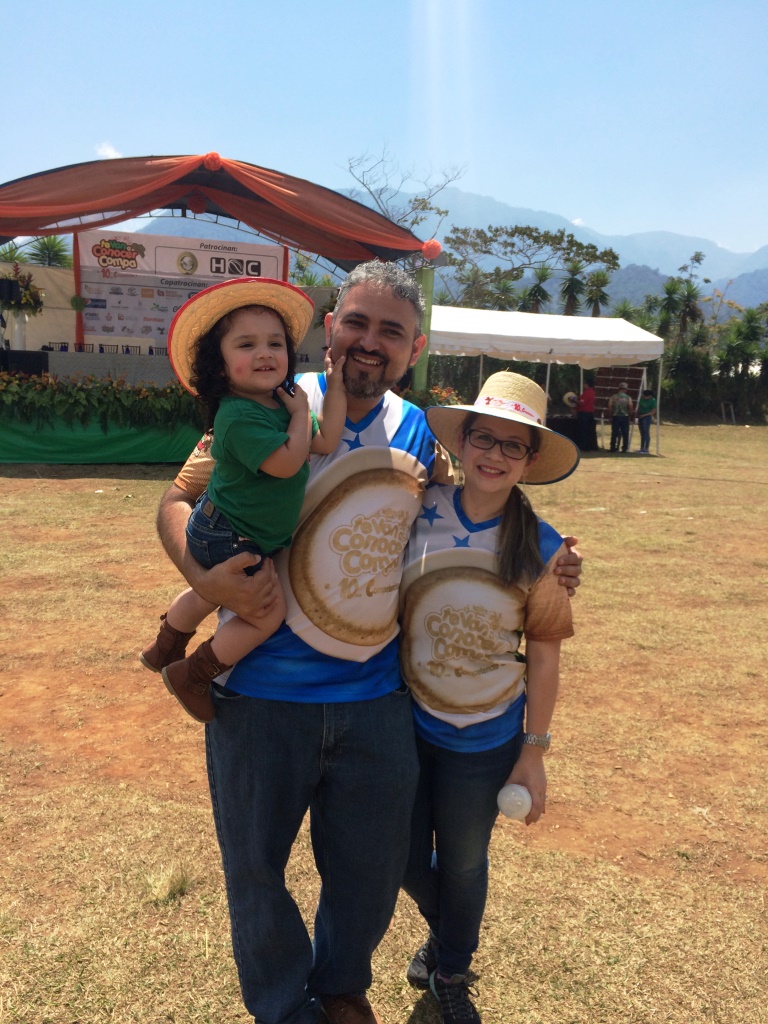 Around the third weekend of March each year, Atlas attends the “Te Van a Conocer, Compa!” micro-lot competition produced by COCAFCAL cooperative in Las Capucas, Copan. Our first event was in 2008, and incredibly celebrated the 10th anniversary of the event this year in 2017! From Marcala we drove directly north through the mountains towards Copan, passing first through La Esperanza and Gracias Lempira, then Santa Rosa de Copan before heading south by southwest towards Corquín and Las Capucas. In the 10 years Atlas and COCAFCAL have worked together, Las Capucas has transformed as the world has learned about the excellence of their coffee and the beauty of the community. As well as being home to one of the best-known coffee cooperatives in Central America, Las Capucas has developed a thriving eco-tourism business. Along with learning about coffee planting, picking and processing, a visitor can enjoy zip-line canopy tours and relax poolside in Las Cabañas. 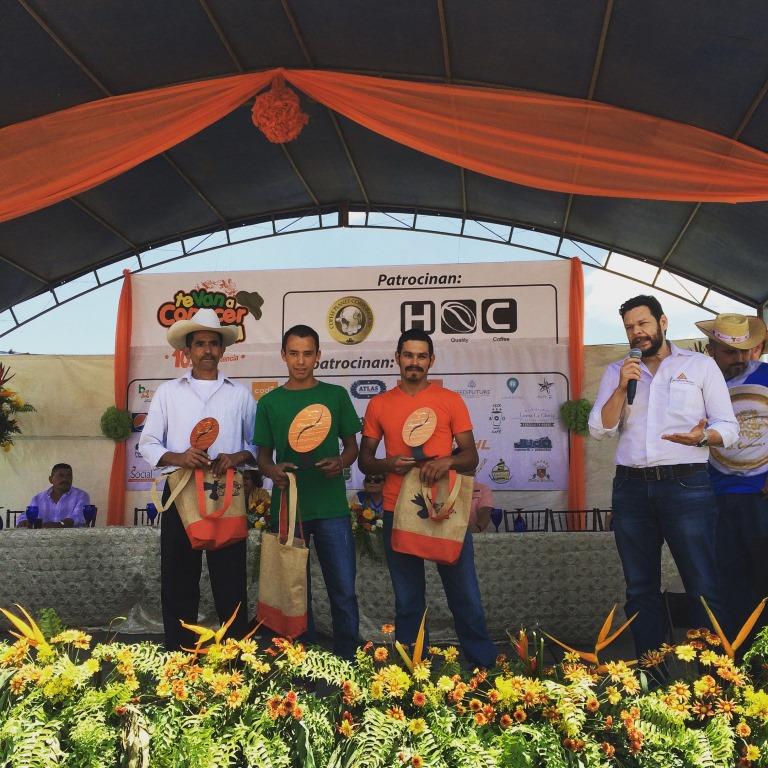 After several wonderful days cupping coffees and visiting with our friends in Las Capucas, the “Te Van a Conocer, Compa!” awards ceremony wrapped up the event. Señor Angel Antonio Lemus took home 1st place this year, and the buyers attending the event selected some amazing micro-lots for their roasting companies.

Our last stop on our tour was in Peña Blanca, department of Santa Barbara, to visit our good friends at Beneficio San Vicente. Coffees grown by San Vicente’s clients in the villages of El Cielito, El Cedral, Las Flores and others have changed the international market’s perception of how coffees from Honduras can taste. Often mistaken for coffees from East Africa, San Vicente’s coffees explode with sweetness, acidity and ripe, tropical fruits, and are highly sought-after. They’re in such high demand that Atlas rarely carries spot offerings from San Vicente farmers. Many buyers visit the communities with San Vicente staff each year to select their own coffees. If you’re interested in learning more, please feel free to get in touch with our office.

Harvests in both Nicaragua and Honduras are slightly delayed this year due to cold, rainy weather in December, but quality is terrific! We expect our best micro-lots from both countries to start arriving late-June, so keep an eye on our social media and offer lists for more details.