Peru For All Of You

Peru is an expansive land of mountainous beauty and we look forward to every opportunity to visit. This year we spent time with friends, both old and new, and had the pleasure of exploring some new areas of the country, previously unseen by the eyes of Atlas. Our first few days were spent about 60 kilometers north of Jaén, visiting CAC La Prosperidad de Chirinos, a supplier of one of our traceable FTO coffees from Peru. Constantly working towards quality improvement, environmental sustainability and programs to benefit the well being of members and their families, Chirinos has undergone many changes since our last visit eleven months ago. They have added 95 new producer members this year, bringing the total to 817.  The cooperative expects to export nearly 90 containers this year, nearly 50% of those scoring 83 points and above, which we think is pretty exceptional. One of the principal projects over the last year has been the education on and installation of secadoras solares (enclosed drying areas) for members. While some producers had these structures already, the majority of members were drying coffee on tarps at their homes, always at risk of rainfall or very cool temperatures, especially during July and August. For those that already had an existing structure, improvements were made to expand the space to allow for increasing yields,  and promote better air flow for uniform, accelerated drying. 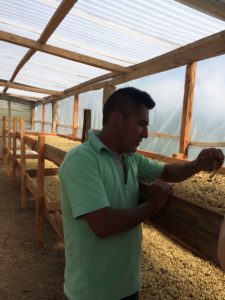 To give a snapshot of what it's like to to be a member of Chirinos, let's use Obal Pita as an example, a shining one at that. Atlas has been purchasing a micro-lot from Obal Pita's Finca Pico Pico for the last several harvests and will do so again this year. Using the quality premiums he received over the last few years, Obal completed construction of his drying area which now boasts 14 raised beds, and keeps his coffee secure from harsh weather. He spent about $1,500 USD to finish the project, and the quality improvements are already evident in the cup. Total drying time for him is about 20 days, due to his high altitude of 1,700 masl. Obal has a plentiful harvest so far, with yields between 40-45 quintales (100 lb bags) of dry parchment coffee per hectare, equivalent to around 32-34 bags of exportable green coffee/hectare. He planted 3200 new trees this year of Pache, Pacamara, Bourbon, Typica and Catimor varieties. He is a bit of a risk taker, and loves to experiment with new varieties in the hopes they will have great yields, and of course perform well in the cup.

In addition to working his own land, Obal is also employed by the cooperative. As we have described in past trip reports, Chirinos is a very dynamic group with a strong dedication to programs that assist farmers through the diversification of their lands. In addition to trout, guinea pigs, sheep, compost and fertilizers, Chirinos launched two new diversification projects over the last year; pigs and vegetable gardens. Through visiting local pig farms, Obal received training as was made the manager of the pig nursery, tending to pregnant and nursing pigs. The group began with 19 pigs, and have goals of reaching 60 pigs by the end of the year. Obal learned to inseminate the sows, care for them during and pregnancy and assist after they have given birth to their droves. The intention is that over the years, members will receive a pig, and bring that pig back back to the nursery when they are ready to give birth to provide further litters for other members. Finally, the group also used their premiums to fund "biohuertos," programs that provide training on vegetable planting and maintenance as well as the dissemination of seeds. Many folks converted a portion of their land (around 1/4 hectare) to accommodate for these gardens and are able to produce much of the food they consume. Common items are cabbage, lettuce, cilantro, herbs, onions, potatoes, and corn. 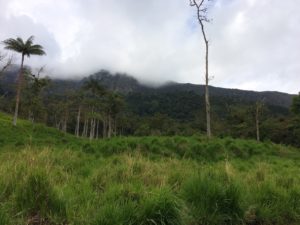 Looking up the mountain towards El Milagro

Next, we traveled north to San Jose de Lourdes, home of CASM El Milagro in the district of San Ignacio. We've been working with this group since 2010, and quality has steadily improved over the years. Producing and selling FTO certified coffees, this group nearly doubled their members since our last visit in 2016, from 70 to 135. Most of those producers have been in conversion to organic certification and are now able to sell their coffee to the coop. The group moved their HQ this year to the local town of San Jose de Lourdes. They are now in a larger space with a proper lab, that is more accessible to the growing number of members. Each producer has an average of three hectares, and in total, El Milagro hopes to export 9,000 bags this year.

El Milagro is also working on better drying techniques, and like Chirinos have constructed enclosed structures to help speed up drying. This is a fairly new program for the small cooperative, but one that will have great effects on overall quality. A micro-lot program was initiated in 2015 and over the last two years, this group has been diligently focused on increasing cup scores through lot separation for members. With last year's success of exporting micro-lots, more than 45 producers are participating this year. They are both excited and motivated to  maintain their lots separate so they can be assessed by the lead cupper (Agenor Fernandez) and receive feedback. Several clients are purchasing micro-lots from El Milagro and we look forward to seeing continuing improvement there as the program develops.

Finally, we met with another longtime supplier, Cebicafen located a few miles from the Ecuadoran border in Namballe. This group was initiated in 2009 and Atlas has been working with them since they year following their inception. Beginning as a relatively modest cooperative, Cebicafen has seen big changes over the last several years. They moved into new offices, complete with a great cupping lab, and ample space for their warehouse. 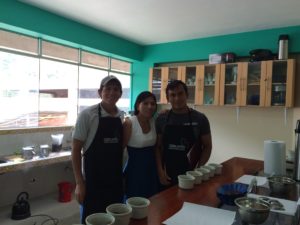 Manager and QC of Cebicafen

Additionally, over the past year, Cebicafen have implemented two new programs in conjunction with World Bank and the Peru Ministry of Agriculture and Risk. The first is aimed to improve commercial sales for Cebicafen and make sure that all of their coffee finds a suitable home. They produce around 13 containers per year, but due to lack of market access, they have not been able to export all of it. To do this, they are focusing on agricultural innovation to have more fertile soil, better overall yields, and an investigation of what particular varieties will be most lucrative for the group. With those same partners, Cebicafen launched another project this past year which provides funding for improved quality at the production level through improvements to fermentation and drying techniques. This program works with a four step plan. The first is geo-referencing each members' plot to identify the most productive areas. Next is the selection of six different land parcels of different altitudes and slopes to see which perform the best. Third is to the construction and implementation of six cement fermentation tanks that were distributed through different zones. Producers can take turns using the tanks and hopefully achieve a more uniform cup quality. Finally, is the building of modified drying systems (similar to those used in Chirinos and El Milagro) which guarantee better care and improve quality for coffees in this state.

Fresh crop lots are already landing and we expect micro-lots in January so keep an eye on our social media and offer lists for more details!