In November of 2018 we took our annual trip to Indonesia, which always an exciting adventure. It was a perfect time to visit and learn more about the seemingly everlasting supply crunch, as well as the extreme price volatility that began in January of 2018. You can read more about that here. We had the opportunity to speak with a variety of exporters in the bustling city of Medan, Sumatra, as well as visit our long term suppliers in the Gayo Highlands, and a newly certified cooperative on Java.

Before heading to Sumatra, we initiated our trip in Surabaya, Java visiting PT Indokom Citra Persada's East Indonesian headquaters, as well as their dry mill and quality control facility. PT Indokom is the exporter for Koperasi Surya Abada Kayumas, or simply, Kayumas. This year was our first opportunity to meet the smallholder farmers and visit their processing operation in the field. Founded in 2008, Kayumas producer members come from two separate villages, Kayumas and Taman Dadar, and they are primarily from the Javanese and Maduranese ethnic groups. They are comprised of 150 total members, 59 of which are female and they continue to add new members every year. Their growing area is quite remote, about a 7 hour drive from the nearest airport in Surabaya, Indonesia’s second largest city. All producers live within a 14 km radius of the cooperative's base. During harvest period, each farmer brings their cherry to one of 3 centralized pulping and fermentation areas. 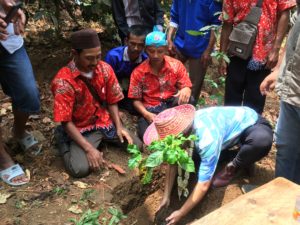 Kayumas gained their Rainforest Alliance cert in 2010 and (with the support of Indokom) they also became the first fair trade certified group on Java, exporting their first FT lots in 2018. The cooperative expressed immense joy to have become fair trade certified, as the process itself has brought the community much closer together. Moreover, it has paid for new infrastructure such as a paved pathway to the farms, making harvesting and cherry delivery safer and more efficient, while also providing funds to purchase and plant more coffee. Fair trade certification has also motivated the youth to stay in the community and continue to produce coffee, by vastly improving the economic level of households. Read more about Kayumas on their traceable page here.

Our next stop was Medan, Sumatra where we visited several of our exporting partners, including CV Harapan Bersama, PT Indokom Citra Persada, and Eka Nusa. In Medan, many exporters are primarily located in the industrial area knows as Binjai. In contrast with other countries where we work, most exporters on Sumatra (or at the very least, our partners) appear to be quite friendly and offer support and assistance to each other when/if they can. This past year, this support was especially important as most larger exporters were struggling to find enough coffee to fulfill their contracts. Before 1990, there were 1100 registered exporters operating across Sumatra, most of them with offices in Medan. Today, there are less than fifty active exporters. In 2018, approximately 70% of Medan exporters defaulted on at least one contract, while several larger exporters were forced into bankruptcy due to defaulting. 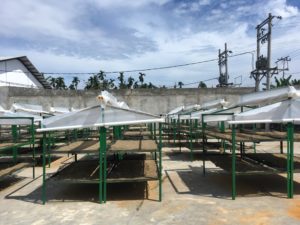 After two days in Medan, we flew to Takengon, the hub city of the Gayo Highlands. Our first several days were spent with Ketiara, which operates two cooperatives (Koperasi Ratu Ketiara with 971 active members and Koperasi Ketiara with 1670 active members) along with Rahmah's family's company, PT Ketiara. The price and supply crisis was heavily felt in this area as well, as most "Mandheling" coffee comes from this region. Despite a tough year, Ketiara chairwoman Rahmah explains that producer members who sell their coffee to Ketiara remain very loyal to the cooperative, as their quality of cherry garners higher prices than can be paid my most multinationals. Local producers are very well informed about Sumatra prices, and cell phones are immensely important for farmers. It is one of the greatest tools they have, as they are essential for sharing and receiving daily prices in their very volatile internal market. Producers know (despite the incredibly low NY C market price), that their local market can fetch prices 3 times that amount. They are also often supported by their technologically savvy children who are becoming more and more aware of the Indonesia market. This allows for producers to demand higher prices for their coffee because, ultimately they know they can get it, even more so in low yield years. Most recently, Ketiara has been especially focused on technical assistance, with the goal of improving production for members. By using a "train the trainers" model, each village within Ketiara has five trained professionals to efficiently disseminate information and also assist with agricultural related issues. With weather (and rains in particular) becoming more unpredictable each year, members rely on improved yields more than ever before.

Ketiara has also done a fantastic job encouraging youth to stay involved in coffee through opportunities within the cooperative. Ratu Ketiara (which was initiated in 2017) is made up of 2/3 women producers, and many of them are young farmers who have taken over their family's land or purchased new land for themselves. The board of directors is entirely led by young women under thirty. These are full time positions within the cooperative for posts such as treasurer, secretary, QC manager, logistics, accounting, contract management and more. Through administrative and agricultural opportunities, Ketiara has established themselves as a leader for keeping youth in coffee. 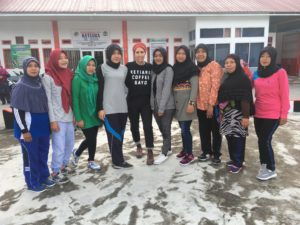 We culminated our Indonesia trip with Koperasi Permata Gayo Cooperative (PGC). This year marks our ninth anniversary working with PGC and their chairman, Pak Armia. PGC also gives technical and quality control assistance to both Koperasi Kokowagayo (a 100% women member cooperative, with whom we also work) and the newer cooperative, Musara Pakat. Hearing a now familiar story, Armia too explained that 2018 was an incredibly challenging year for the coop. In 2018, production was down 40-50% from "normal", although demand remained steady. PGC had planned to sell 1500 tonnes of coffee in 2018, but ultimately exported just shy of 750 tonnes due to such low supply. Armia says that climate change is the culprit. Throughout 2018, production areas below 1100 masl had over 20% of cherries with empty beans. This was caused by a drought between January and July of last year. In an attempt to combat this, many producers are forced to look for land at higher altitudes or abandon coffee altogether. Any newer members (and there were 250 this year for PGC) are encouraged to plant above 1200 masl, where possible. Harvest is looking a bit better than last year, but prices are still high due to exporters trying to cover their shorts.

In more optimistic news, Armia unveiled his completed state-of-the-art wet and dry mill, named Junggele, which he rents to the cooperatives. This facility was designed for the seven top performing villages (in terms of quality) and is redolent of a Central American centralized wet mill. Fifty percent of the coffee is fully washed, and they are also experimenting with honey processed coffees, and traditional wet hulled methods. Additionally, PGC started a youth council, comprised of 50 young professionals (all under twenty-five). They are mostly employed at Junggele and manage processing from cherry to export. They also hold administrative positions, like accounting duties and quality control. Many members from the youth council had the opportunity to travel to both Singapore and Bangkok this past year for coffee related events. 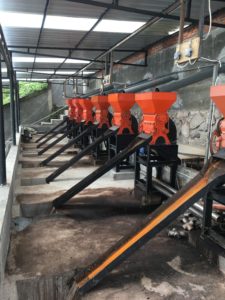 Despite unforeseen and terribly difficult challenges this past year, we continue to be impressed by our suppliers contract efficiency and performance, agricultural innovation and dedication to quality.