In mid-March, we spent a few quick and productive days in Costa Rica before returning to Guatemala for the second time this winter. In Costa Rica, we visited our NKG partner CECA and also Santa Elena Estate, one of our longest traceable relationships. Costa Rica is one of the most regulated coffee countries in the world. Inspired the Cuban Tobacco laws from the 1960's, the government has always and continues to place very strict rules on exporters to ensure that they have the producer's best interest in mind. A few examples of this are the following:

This last example is particularly interesting, as the NIRS is a tool for rapid, non-destructive assessment of multiple attributes of organic materials in coffee. The machine is able to detect the origin of a coffee, as well as determine if it has been mixed with any adulterants (such as Robusta or coffee not actually produced Costa Rica). 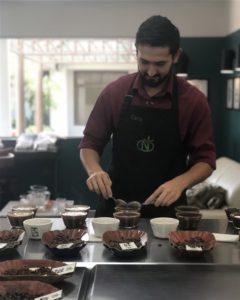 We also spent a full day visiting CECA's stunning new office in San José which houses their trading offices, logistics, and a gorgeous cupping lab. We cupped through more than 60 samples of incoming micro-lots and our clients had the opportunity to select their favorites. The following day we also visited CECA's wet mill Palmichal, where they have invested in new equipment to better support the processing of micro-lots such as new blowers for each of the mechanical dryers, a new furnace for greater efficiency, new patio space at the micro-mill, new Penagos pulper for micro-lots, and a new centriflux for water recirculation and environmental sustainability.

Chelsey Walker-Watson (West Coast Sales) shares her experience at Santa Elena Estate: "Next, we headed to Santa Elena Estate to visit Luzma, our partner of over a decade. We have been working with Luzma for years and since she lives in the Seattle area six months out of the year, we get the chance to connect with her more than almost any other producer that we work with.  So, it was especially lovely to visit her family’s Santa Elena Estate, a collection of four farms with a rich history that Luzma has been leading for thirty years.  The production information and anecdotes here stand the test of time, so we were able to spend the day touring the beautiful farm, listening to Luzma’s stories about her experiences, and learning about innovations at Santa Elena. When talking with Luzma, her passion is palpable, as well as her ownership and ambition. She is a pioneer in specialty coffee, not only in Costa Rica but the industry at large, selling directly to roasters and marketing Santa Elena before traceable coffees were common and experimenting with processing methods like honey and naturals before any other producers in Costa Rica. Ever the innovator and driver of quality, Santa Elena was the first mill in Costa Rica to implement the use of a Centriflux. As a result, Luzma was able to reduce her water usage and the number of floating tanks required for processing. 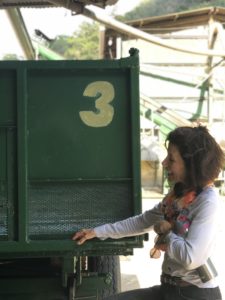 Luzma at her Santa Elena Estate

The washed and honey lots for Atlas had just been milled and awaiting transport to the FOB port during our visit. This harvest was challenging for producers, as they experienced heavy rains in October and then a prolonged dry spell, which reduced yields. To adapt, Luzma changed picking practices, consolidating employees to pick on one farm and revising collection times for cherry. In anticipation of next season, Luzma is consolidating her nursery to upgrade irrigation, using gravity to capture water flowing from the mountain. She also redesigned trucks to better transport demucilaged coffee for drying, and we explored the mill to learn about future revisions to increase sustainability and capacity through the reduction of power and water requirements."

From Costa Rica, we hopped on a plane to Guatemala City. We had the opportunity to travel to Guatemala twice this year, once in February and again in late March for the 7th annual CODECH cupping competition. We work with producers across this expansive country, ranging from large single estate owners to smallholder producers who are cooperative members. We began the first part of the trip visiting Dinámica Crops in Guatemala City. Dinámica dry mills most of our FTO coffees from cooperatives like CODECH and ACODIHUE. They are a family with a deep coffee history, operating a relatively new mill that has been open for just four harvests. Dinámica is located in the northeastern quadrant of Guatemala City in Zone 18, making it the only mill to exist within the city. They have doubled their exports in the last two years, and expect to process more than 225 containers this year. Their mill is truly impeccable, and boasts the finest and most innovative processing technology. In addition to milling coffee, Dinámica also offers their services for trading, logistics, financing, quality control and packaging. We have seen the quality and lifespan of several of our favorite coffees improve since switching to Dinámica mills. 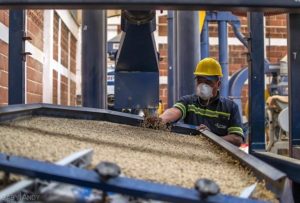 From the mill, we headed to the most western department of Huehuetenango to visit CODECH and ACODIHUE. Normally a 7-8 hour drive, the country began a new airplane route this year which travels between the capital city and Huehuetenango. Lasting under 30 minutes, it saves nearly a whole day of car travel so we can spend more time with our partners. We visited CODECH on two separate occasions this year, once for an initial check-in and then again for the annual CODECH cupping competition. Tymika Lawrence (East Coast sales) shares her experience at the competition and her first origin trip with Atlas here:

"This year 59 producers entered lots, the most ever! As a newbie to the competition, I was floored by the complexity, and articulate acidity and sweetness found in many of the coffees. More than that, I was struck by the sheer passion and determination of the team at CODECH. They pushed through power outages, were eager for feedback on sample roasts, and spent time helping some of our longer-term CODECH buyers connect closer with the community, and producers they’ve partnered with. This year’s cupping competition also came with an exciting update--in addition to the premium that the top 10 winners receive for their coffees, there were big cash prizes as well. We really wanted to communicate that we place value on the time and effort it takes to produce great coffee, and we hope that next year we’ll have even more participants!

Time and time again, roasters who had seen the evolution of quality at CODECH kept telling me “these coffees are the best they’ve ever been”. And after having spent time there, it’s easy to see why--when importers and roasters are willing to invest in communities that have the ingredients for wonderful coffee, it’s much easier for producers to see the value in putting in the extra work it takes to produce incredible coffee. The trust and respect I saw between CODECH and their roaster partners creates fertile ground for fruit of all kinds--and that’s doing good and being good if I ever saw it." 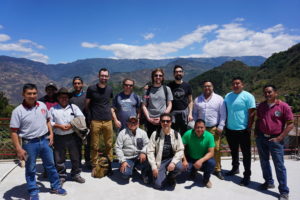 Just down the road from CODECH lies ACODIHUE (Asociación de Cooperación al Desarrollo Integral de Huehuetenango), another certified group with whom we have been working with closely for years (mainly for back to back buyers). Originally founded in 1996 with support from the EU and the Guatemalan government, ACODIHUE has slowly built its membership and its reputation for quality coffee. Felix Camposeco is the commercial manager and has been with ACODIHUE for the past 17 years. He is an incredible force within the community and has helped advocate for women producers and their economic independence in the area. Currently, ACODIHUE has 1055 members, 821 of which are women who have between .04 -1 hectare of land. In the early 2000’s ACODIHUE initiated a coffee project for women and when the program ended, the women still wanted to work in coffee as a full time career. In 2012, the cooperative initiated a formal women’s group and began selling women-produced coffee under the name “Manos de Mujer”. Now there are 21 separate womens’ groups (each with between 15-100 members) who are separated by region throughout Huehuetenango. All of their coffee is fair trade certified and more than half is organic certified. Read more about this group, on the ACODIHUE traceable page. 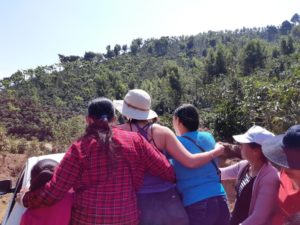 Also located in Huehuetenango, are the estates of the Vides 58 family and brand, managed by Renardo "Nayo" Vides. Nayo has been diligently working to renovate his various farms, with a goal of 3% renovated area every year. He has a very impressive seed garden and is constantly in pursuit of finding the best quality coffees and the most productive varieties. Due to the farm's proximity to the Mexican border (only a 20 minute drive), one of the greatest challenges this year has been the rapid migration to the US. Because of this phenomenon, Nayo has found it extremely challenging to find reliable pickers. Additionally, many people now have their own land where they harvest beans and corn, so there is less manual labor available than ever before. Despite challenges on the farm, we purchased more coffee from Nayo this year than ever before and we are very excited to keep supporting his efforts. 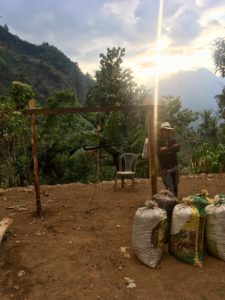 On our second trip to Guatemala, we visited Juan Francisco Pira and his two estates on the shores of Lake Atitlan in the country's southwestern highlands. Juan is the director behind our Atlas profile Monja Blanca. As the rains have become more and more unpredictable over the last decade in this region, Juan has been hard at work on an irrigation project for La Providencia, his large estate that abuts the lake. The idea is that if the rains stop after the first flowering (as they have in the past few years) Juan will be able to use irrigation to hydrate the plants through his project. During the months of July and August, Juan has noticed that his plants are suffering from dehydration which effects the overall size and density of the bean. Irrigation is set to begin in the next month, and fertilizer for the plants will also be applied through the system. Juan believes that he can use less fertilizer per application (dropping from 9 oz to 5 oz), but plans to fertilizer 6 times more than normal, with 20 total applications per year. Juan believes that the plants will be better fed and hopefully reach a higher quality level. He will also have less labor costs with this mechanized application. 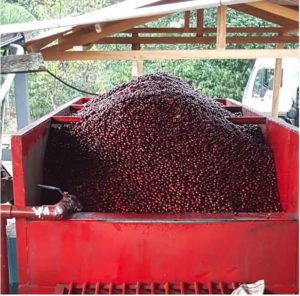 We spent a total of nearly 5 weeks in El Salvador, Guatemala, Mexico and Costa Rica in 2019. While the sentiment was certainly pessimistic regarding the C market, we celebrated the longevity of our relationships there, the opportunity to bring roasters to meet producers and work with sustainable outright pricing as much as possible. We look forward to seeing all our friends again soon.