Flores is part of the Lesser Sunda Islands, located in the Eastern half of Indonesia. It was founded by Portuguese explorers in the early 16th century, when they landed on the eastern peninsula and named it “Coba de Flores”, for its impressive underwater gardens. In terms of coffee, it is one of the newest origins in Indonesia, as its coffee was commonly blended with other nearby islands in the past. The terrain is rugged and marked by numerous volcanoes, both active and inactive. Ashes from past eruptions on the island have created an especially fertile land, and the highly porous, dark-colored soils are ideal for organic coffee production.

Inhabited by several different ethnic groups, all speaking their own languages, Flores is the 10th most populated island in Indonesia. Blue Flores is produced by the Bhajawa people, who mostly inhabit the highlands of Central West Flores in the Ngada District. Coffee is their main source of income, although they also grow rice, cassava and corn. S795 is dominantly grown, with Typica, Catimor and Timor Hybrids also in smaller volumes. 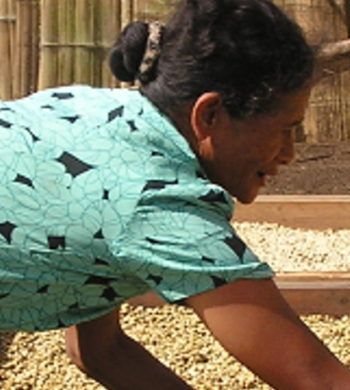