The Republic of Malawi, a small southeast African country bordering Mozambique, Tanzania, and Zambia and flanking the western shore of Lake Malawi, achieved independence from the British in 1964. Dr. Livingstone, the famous Scottish missionary and explorer, first visited Malawi in 1859, but coffee was not introduced until the late 1800s when Dr. John Buchanan brought a Nyasa coffee varietal from the Royal Botanic Garden in Edinburgh.

Throughout colonial rule, the British owned large coffee plantations and forced locals to works under challenging conditions with little pay. Commercial estates were concentrated in the Thyolo and Mulanje regions in Southern Malawi. After independence, the government created special coffee organizational structures, and in 1971 the smallholder coffee sector was organized under the Smallholder Coffee Authority (SCA). Due to a variety of factors, including Coffee Wilt disease and organizational mismanagement, coffee production declined throughout the 1980s and 1990s, and in the mid 1990s the government began more actively pursuing privatizing state-owned enterprises with the goal empowering smallholder farmers to manage their own businesses. Today, southern Malawi is still home to a few coffee estates, with 3,000-4,000 smallholder farmers–most with fewer than 200 coffee trees each–found in Northern and Central Malawi and operating within cooperative structures.

The vast majority (90%) of Malawi’s 18 million residents live in rural areas, most commonly growing tobacco (55% of Malawi’s total exports) tea, sugar, nuts, and legumes in addition to coffee. Malawi’s climate is subtropical, with rainy seasons from Oct-Nov and May-June, and specialty coffee production has slowly gained momentum thanks to groups such as Mzuzu Cooperative, which is working to improve quality and increase market access to its members. 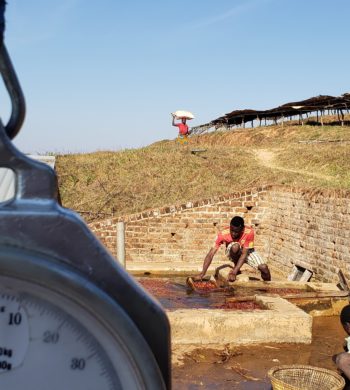