Rebuilding the Hope of a Nation

Marcelline Budza, inspired by her own mother’s resilience, established Rebuild Women’s Hope (RWH) in 2013 along the shores of Idjwi, a large remote island in the middle of Lake Kivu in eastern Congo with a vision “to place women at the center of the integral development of her community” and that “building the hope of women is building the hope of the entire nation.”

Even in its early days, the cooperative is investing in the lives of members in meaningful ways. Micro-credit programs are hard to access and often come with exorbitant interest rates, so RWH offers pre-harvest, interest-free loans which producers can repay during the harvest with either cash or cherry. RWH has plans later in the year to start a nursery program to begin replacing the older bourbon trees that are common in much of eastern Congo. They also have plans to build a health clinic on the island–and in late 2019 have purchased land and have schematics built for the clinic!–as many members currently lack access to basic health services. Additionally, RWH is offering an incentive program where they give members a cow or a goat at the end of the season if they reach certain cherry-delivery thresholds.

Each of the cooperative’s two washing stations sits along the shore of Lake Kivu, at around 1,500 masl, with producers harvesting cherry up to 2,000 masl. Producers deliver cherry either to cherry-collection sites or directly to the washing stations, where they sort the cherry on a table, then float and remove the “floaters” (unripe coffee), weigh, depulp, and then have a wet soak (with continuously running water) for 8 hours following by washing, pre-drying, and drying the parchemnt on raised beds for up to 24 days. The result? A delicious cup of coffee that includes notes of chocolate, brown sugar, baking spice and vanilla, with citric acidity and syrupy body. 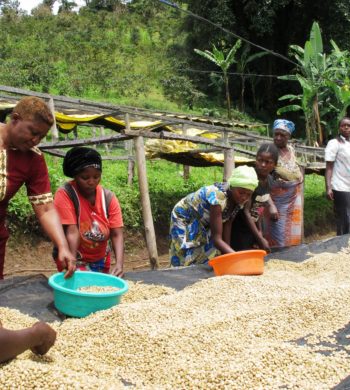