In September, Craig, Karen and Chris spent a few days in sunny Anaheim, just a stone’s throw away from all the Disney a person could want.  Here we provide a snapshot of that magical weekend, for your reading enjoyment:

Karen:  After setting up our booth, Chris and I headed over to the SCAA open house at their new headquarters in Santa Ana.  Located in a remodeled department store, the HQ elevator opens to a large, welcoming brew bar area, in front of a very open and airy office space.   Mansi’s smile met us at the door (Mansi’s the SCAA’s Membership Director,) and we were off to enjoy coffee drinks from Equator, HHC Roasters, Portola and Blue Bottle.  The visit ended with blueberry lemon doughnuts from the doughnut wall …uh Craig, maybe Atlas HQ could get one of these?!! 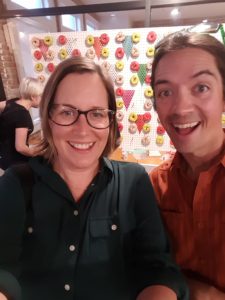 Craig:  On Friday evening, many of the attendees and exhibitors made the three block walk (which, in Anaheim, is about six miles) over to Bowlmor Lanes for an evening of bowling, beverages and conversation. I’d love to say I represented Atlas proudly on the lanes, but the sad truth is I seem to have forgotten how to play. Maybe it was the long walk. Maybe it was the fact that the ball I was using was so tiny I had to palm the damn thing. It could’ve been the fact that I was hurling the rock as hard as my reconstructed shoulder would allow. Whatever the case, I’m not going to quit Atlas to join the pro bowling tour. But even as I failed on the lanes, I enjoyed hanging out with my fellow coffee people. The evening was a great reminder of how much fun coffee people really are, and how lucky we are to work in an industry that self-selects for interested, interesting people.

Chris:  Anaheim 2016 marks my 15th year of attending Coffee Fest shows, which is a little tough to believe!  It’s always a blast seeing friendly, familiar faces around the show floor, and decompressing off-site in the evenings.  The years can start to blur together, so it’s really great when Coffee Fest throws some new programming into the mix.  Anaheim was the first show where I’ve noticed the Coffee Fest “Campfire Sessions,” which basically put an industry professional at the center of a ring of seats in the role of storyteller.  Show attendees gather ‘round and listen to these professionals recount their invaluable real-world experiences working in Specialty Coffee.   The campfire area even includes a campground photo backdrop complete with a sweet-looking vintage VW bus. 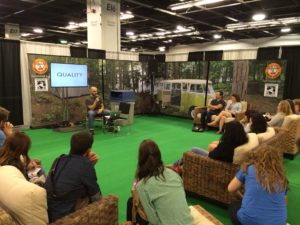 Karen:  Coffee Fest’s inaugural America’s Best Cold Brew Competition took place over the three-day event, and proved to be a real crowd favorite.  Thirty-two competitors squared off in head to head battle, the winners determined by popular vote. Cold brew beverages could only be comprised of coffee and water, sampled either “traditional still” or “nitrogen infused”.  This category has really taken off, and it was very interesting to taste the different expressions of cold brew.  Blends and single origin were presented, with Klatch, Scotty D’s Jamaican Coffee, Passion House and Kean Coffee in the final 4. Klatch Coffee was the winner with their nitrogen infused complex Ethiopian. I know I loved starting my trade show day with cold brew samples!! 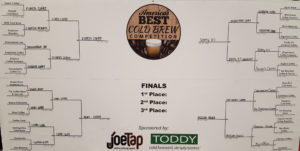 Chris:  For me, one of the best parts of Coffee Fest is strolling the show floor, connecting with folks and seeing what cool new products are out there.  Usually this happens on Sunday, towards the end of show after people have had plenty of time to explore and report back to us with their findings.  The two names I heard over and over again were “Cafflano” and “Kyuemon,” which are pretty catchy names in their own right.

From what I gathered visiting their booth, Cafflano’s introductory product was their “Cafflano ‘Klassic’,” which is an all-in-one grinder/dripper/tumbler that looks terrific for travel and outdoor use.  This guy can explain it better than I can.  A new Cafflano product for 2016 is the “Kompact,” which is a fun, squeezy way to brew hot or cold coffee using a full-immersion and a metal filter.  Back to this guy for more details! 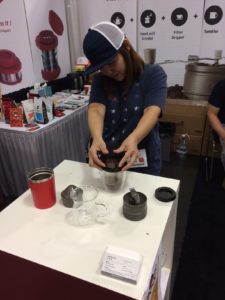 The Kyuemon ceramic filter is something I’d never seen before, and the concept and design both look very impressive.  As I understand, the porous ceramic filter material physically prevents grind particles from passing through, but also collects some arguably undesirable insoluble solids.  This collection makes for a cleaner, lighter cup of coffee, which was the case with the brewed Kenya sample I tried in Kyuemon’s booth.  Similar to a water filter, the Kyuemon can also purportedly be used to purify alcohol (and yes, also water.)  The Kyuemon website recommends using the filter to improve the flavor of Japanese shochu, although maybe best to try cleaning up your spirits after cleaning the filter.  Another cool thing about the Kyuemon filter is that cleaning is done by burning the collected coffee residue off in direct flame or in a very hot oven. 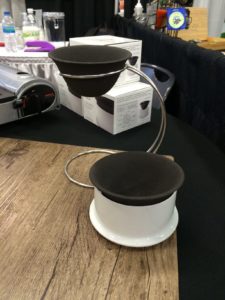 Craig: Throughout the weekend, we strolled down the 300 aisle to where the America’s Best Espresso Competition was taking place. Competition was tight, pitting a variety of espresso paradigms against each other – lighter roasts versus darker, crisp and citric washed coffees versus wild-eyed fruit bomb naturals. In the end, it came down to a face-off between Dragonfly Coffee and Klatch, both of whom competed with the Panama Elida Estate natural. Based on the judges’ descriptions, it was hard to tell who was going to win. In the end, Klatch edged out Dragonfly. Regardless of who won, it was great to see so many different styles of espresso performing so well. It was a great reminder that there are countless ways to do espresso “right.”

We’re all looking forward to our next Coffee Fest show!