Kicking off 2017 in El Salvador and Costa Rica

During the first two weeks of January, we took our first origin trip of 2017. This visit was focused on our relationships in El Salvador and Costa Rica, and was one of five trips to Central America this season. We kicked off our trip in Western El Salvador, visiting producers and exporters in the Apaneca-Illamatepec Mountain Range. This region produces some of the highest quality coffee in the country, and has the largest concentration of producers by coffee region. We have deep relationships in El Salvador, many of which date back almost a decade. Our first stop was to visit producers Nancy Majano and José Arenivar, of Finca Monte Rey. Nancy and José have an exciting story. In contrast to most Salvadoran producers who are now fifth or sixth generation farmers, this couple is considered “new” to the game, although you’d never know it. After growing tired of their non-agricultural careers, Nancy and José purchased their 240 manzana farm (roughly 417 acres) in 2004. Of those 240 manzanas, 130 are planted with coffee, 60 of which are currently producing. The other 70 are newly renovated or will undergo renovation in the near future. The farm ranges from 1250-1650 masl, and is primarily planted with Bourbon and Pacas. Although nowhere near the micro-mill phenomena of Costa Rica, small processing centers located on a single producers' land are becoming more commonplace. Nancy and José do their own wet processing and mechanical drying right at the farm. Milling and sorting is done nearby at Beneficio El Borbollon.

El Borbollon is owned and managed by father and son duo who share the same name, Eduardo Alvarez.  To head up quality control, they brought aboard seasoned Salvadoran producer and cupper, Luis Rodriguez in 2015. Together this team manages milling, commercial sales and exports of nearly 90 containers per year, half of which are specialty. El Borbollon saw many exciting changes during 2016. The mill added twenty more raised drying beds, bringing the total number to 58. They built a floater pool in order to pass all specialty naturals through a flotation system, which will result in cleaner naturally processed coffees, with lower defects. Additionally, they have added more key personnel in control points, creating a better link between the staff managing the patios, raised beds and dryers and those in the warehouse. El Borbollon is experimenting with maceration, which is an anaerobic fermentation where the contact between coffee cherries and air is minimized. They have also invested in Sinar equipment to help manage humidity and drying practices. We look forward to seeing how these upgrades positively influence coffee quality this year.

Next we headed to Beneficio and Finca El Manzano to visit producer/miller/exporter Emilio Lopez Díaz of Cuatro M Cafés. It is hard to keep up with the innovator that is Emilio, as he is in a constant state of renovation - both at the farm and mill level. Since 2014, Emilio has been replanting Finca Ayutepeque (which produces coffee grown up to 1100 masl) and also Finca El Manzano (1300-1500 masl).  Emilio has over ten varieties currently in production including Red, Orange and Yellow Bourbon, Pacamara, Gesha, Caturra, Pacas, SL 28, SL 34, and Purpurascence. He has even more in his variety garden such as Colombian Gesha, Laurina, Java, Ethiopia Heirloom and Chocolate Bourbon. This year, he added four new Pinalhense guardiolas (horizontal mechanical dryers) each with a capacity of 15 exportable bags. He is also experimenting with new Pinalhense depulpers, which will likely be added to the wet mill next year to help speed up wet processing. One of the most notable things about the way Emilio manages his farm are his production yields. In his lower elevation farm, Emilio is obtaining yields of 75 quintales per hectare (roughly 750 pounds of exportable green coffee) on 2.5 year old Pacamara trees. At Finca El Manzano, he is getting yields of 60 quintales per hectare (600 exportable pounds) from his bourbon trees. These numbers are quite impressive. Emilio believes in full sun planting, and although there are sporadic shade trees planted on both farms, the vast majority of the coffee grown is exposed to full sun throughout the day. By carefully following the flow and slope of the land, Emilio has seen that the trees create their own shade, as new fruit grows under the existing leaves on the tree. With yields like those, he just might be onto something. 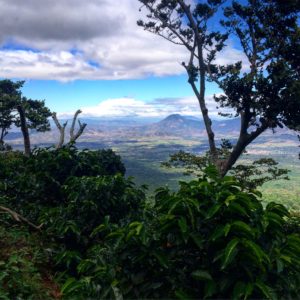 Looking out onto Volcán Chingo from Finca Esperanza of Cafe Pacas

Last but certainly not least, we visited Beneficio Vivagua to meet up with brother and sister duo (Alfredo and Maria Pacas).  Together along with their sister Marcela, these fifth generation producer siblings manage the farms, mill and exporting company that make up Café Pacas. The Pacas are also undergoing heavy renovation at their farms. Since 2011, El Salvador has been facing a decline in coffee production after leaf rust or “roya” infested and destroyed much of the nation’s overall crop. Total exports are down more than seventy percent since the initial outbreak, and many producers have abandoned their farms altogether. The Pacas have persevered in the face of rust, and have made improvements at the farm and mill level to continue their family’s legacy of specialty coffee production. They began renovating in 2013, and continue to replant parcels of their 19 farms, half of which produce specialty coffee. In total, they have planted nearly 700,000 new trees and have another 290,000 slated for plantation between 2017 and 2022. This year, the Pacas created an internal competition among their farms.  Each farm manager has the opportunity to submit a batch of coffee from their farm. Once everyone has done so, those coffees will be judged blindly by the Pacas and also other staff at the mill.  The farm manager with the highest scoring lot will receive a cash prize and also the recognition for their work.  The Pacas feel this is a great way to incentivize the farm managers as well as encourage pickers to select only the ripest coffee.

Next, we hopped on a plane to Costa Rica where we visited with our two exporting partners, Ceca and Santa Elena Estate. We spent the first several days of our visit with Diego Guardia, specialty trader for Ceca, who is also a fifth generation coffee producer (Diego and his father Alberto own and manage Hacienda Sonora).  Historically, Ceca has focused the majority of its business on single lot container volumes.  However, during the 2015/16 coffee year, Ceca built a micro-mill within their larger already existing Palmichal mill. The goal of the micro-mill is to find the ideal process for each particular farm and varietal, based on the brix content, weather, and time of harvest.  The Palmichal mill includes patios for sun-drying, elevated beds for inclement weather, as well as horizontal dryers and a greenhouse.  The mill is home to the largest nursery (in one setting) in Costa Rica. Currently, the nursery has over 450,000 trees, all of which are of the Obata variety.  Beginning in 2014, the Costa Rican Coffee Institute, (ICAFE) has been offering coffee producers seeds and young plants of Obata, which has shown high productivity, tolerance to coffee rust and good cup quality (similar to Caturra).  The idea of providing Obata seeds and seedlings is to familiarize producers with this variety so that they can renew some experimental areas of their plantations, always with the appropriate recommendations of ICAFE’s technicians.  Ceca also handles consolidations with other micro-mills as well as providing great transparency, efficiency and support to farmers.  Cafex is Ceca’s dry mill which is located in Cartago. Within Cafex exists Tesoros del Café, the line of dry milling equipment used specifically for specialty coffees and micro-lots. 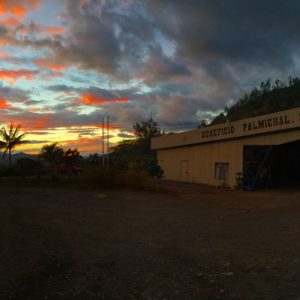 The next day, we headed to Central and West Valley to visit the micro-mills of Hacienda Sonora, Volcán Azul and Cerro San Luis.  All of these mills and farms are vastly different, and it was great to get an idea of the various ways in which producers set up their facilities.  Of these three, we are the most familiar with Cerro San Luis, as we have been purchasing their coffee for the past several years. Currently, they have twelve varieties in production among four farms.  The farms are managed by two couples; Alexander Delgado and his wife Sara, as well as Alexander’s sister Magaly, and her husband Gustavo Guerra. They began processing their own coffee in 2009 and conduct many experiments with varieties and processing. 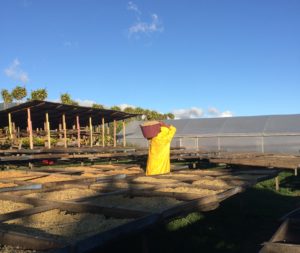 Our last day with Ceca was spent in Tarrazu, visiting Montañas del Diamente and Finca/Micro-mill La Cabaña.  La Cabaña is owned by Javier Meza who has planted his farm with Red Catuai and Caturra. Javier anticipates that he will produce approximately 150 bags of exportable coffee this year. At his mill and farm, he manages every step of coffee processing - harvesting through exportation.  He believes it's the best way for him to maintain complete traceability of his coffee, and every bag is marked and sewn closed while still on his property. Javier strongly believes in maintaining the integrity of the environment, and he has eliminated the use of all artificial chemicals.  He makes his fertilizer on premises, using a combination of coffee pulp and natural organic matter from his farm.

We spent the last day of our trip with Luz Marina “Luzma” Trujillo, owner of Santa Elena Estate and Beneficiadora. Luzma’s father and brother purchased Santa Elena in 1978, and Luzma later took ownership of the farm in 1989, after her father passed away. At that time, she converted it all to specialty coffee production mostly Caturra and Typica.  Luzma’s estate is separated into 8 separate farms, each bearing the name of a flower.  In total, the farms make up 430 manzanas of coffee growing area, all of which is located around the town of Frailes in Tarrazú. Luzma experiments with different processing methods, and we have grown most fond of her honey process.  Some of our clients have been purchasing Luzma's coffees for as long as we have offered it.  We are thrilled to continue to offer this delicious coffee from the passionate, hardworking, and fun woman that is Luzma. 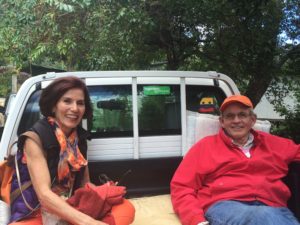