Sample Roasting used to be exhausting when I first began. Twenty to thirty samples a day, five barrels at a time, on a vintage Probat B5 with no gauges and often without enough green coffee sample to do re-roasts. The pressure of expensive buying decisions based on the success of my roasts and the knowledge that every roast would be evaluated by at least three Q graders (albeit nice ones), weighed on my mind.

During this time, I relied on a formulaic method, paying close attention that all my roasts fell within the same roast time window, showed the same color development and lost the same amount of weight. This was an appropriate starting point but it’s rigidity set a tough mark to hit and overall, didn’t produce the best results for every coffee. Often after evaluating the samples during the QC cupping, the sensory panel would find one or two coffees that would need to be re-roasted. These “off” roasts fell within the proper roast windows and color spectrum but none the less, the coffee’s character was obscured by the tastes of being either over or under developed. It was confusing and frustrating. 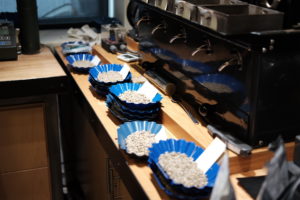 This continued for two years and you might say, “why so long?” For this explanation, let’s take a step back from roasting coffee and towards cooking. My wife Kim is an amazing cook which is easy for me to say out of my love for her but is also confirmed by the many guests who have eaten with us at our home. The thing about Kim is she doesn’t cook from recipes. She will reference them if the dish is something new to her but quickly chooses to add or subtract ingredients or change amounts and never seems to need to reference the recipe for techniques, temperature or cook time. On top of this, years of cooking professionally has made her fast. It is quite comical when you juxtapose her graceful ease to my painfully slow and overly deliberate chopping, dogmatic measuring and bewildered and beholden stares at a cookbook. Once all is finished, I’m lucky if what I have made is little better than edible; thanks for nothing Alton Brown.

So, what am I getting at? Kim has a knowledge of cooking that informs her beyond recipes. She knows how ingredients react to each other, what preparation techniques and tools work best and maybe most importantly, trusts her intuitions. She may have learned to cook with the help of recipes, but she became a great cook from building a knowledge that transcends recipes through the attentive and deliberate act of cooking a lot. The same, I think, can be said for sample roasting. 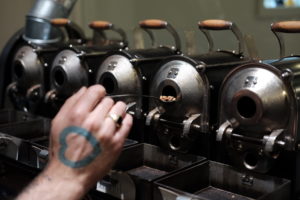 At two years of sample roasting I had clocked over 6000 unique samples. I had also been able to roast the harvest seasons of specific origins twice (sometimes more due to fly crops and bumper crops). This meant that whether I was approaching a conventional grade coffee or a micro lot that Atlas regularly imports, I got a second chance to observe it. This allowed me further insight into deviations that were not explained by my original formulaic approach. I began to recognize that some coffees will darken more with less surface development, that some coffees will lose less weight than average, and some coffees will still be in first crack when I drop them because they finish so quickly (I’m looking at you Myanmar naturals). 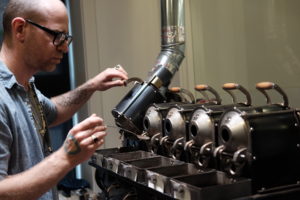 I also came to know Atlas’ Probat B5 very well. I learned that every barrel had a slightly different personality to it and that, where this was once a frustrating quirk, it is now very useful in matching coffees to the barrel that is best for their development. What has resulted is a transformation from the exhausting stress of formulaic roasting, to roasting with an informed intuition about coffee and a unique knowledge of how my equipment works. When I approach coffees from different origins, different mills or different farms; when I roast different cultivars, processes and moisture levels, I can enjoy what I discover in the process and get excited about tasting some coffees I’ve had to wait a year to taste again. 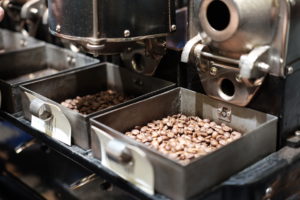