Peru for the People

Our visit to Peru this year was a great success. We spent the entire trip in the northern highlands, in the region of Cajamarca. While the bustling agriculture city of Jaén served as our “base camp”, we made several day visits to our long-term partners, all of whom are approximately a 1-4 hour drive from the city. When speaking with our partners, the recurrent theme across each producer group is that Peru is having a “cosecha retrasada” or in English, a late harvest. Most associations described the harvest being delayed 4-6 weeks, due to cold weather and rains throughout June and July. In fact, during our visit it rained seven out of nine days (usually in the afternoon), with average daytime temperatures around 65-70 degrees. Historically, August has been a month that promises warmer temperatures and plenty of sunshine. Unfortunately that has not been the case this year, which indicates a likelihood of delayed shipments and potential for a greater occurrence of defects. Producers at higher altitudes are reporting 25-35 days of drying time to reach moisture levels of 12%, the highest of the acceptable levels for a pre-shipment sample approval. Statistically speaking, Peru exports showed a 23% lower volume for July 2018 than July 2017, which supports the reports of a delayed harvest (NKG, COINCA).

We launched the trip visiting La Prosperidad de Chirinos. This cooperative is located at 1800 masl in the San Ignacio Province. The year of 2018 was a very special one for Chirinos, as they celebrated their 50th anniversary in February and have been keeping the celebration going all year long. They currently have 807 producer members, who are referred to as “socios” in Peru. Women make up 23% of that figure, with 192 registered female producers for the 2018 harvest. Cumulatively, Chirinos members have 2200 hectares of total land, with each member owning plots an average size of 2.9 hectares. They expect to produce 100-110 full container lots, with 35 of those scoring 84 SCA points and above. Every producer is Fair Trade Certified, with 80% of members also carrying their organic certification. The remaining are newer producer members who are currently in transition to organic. 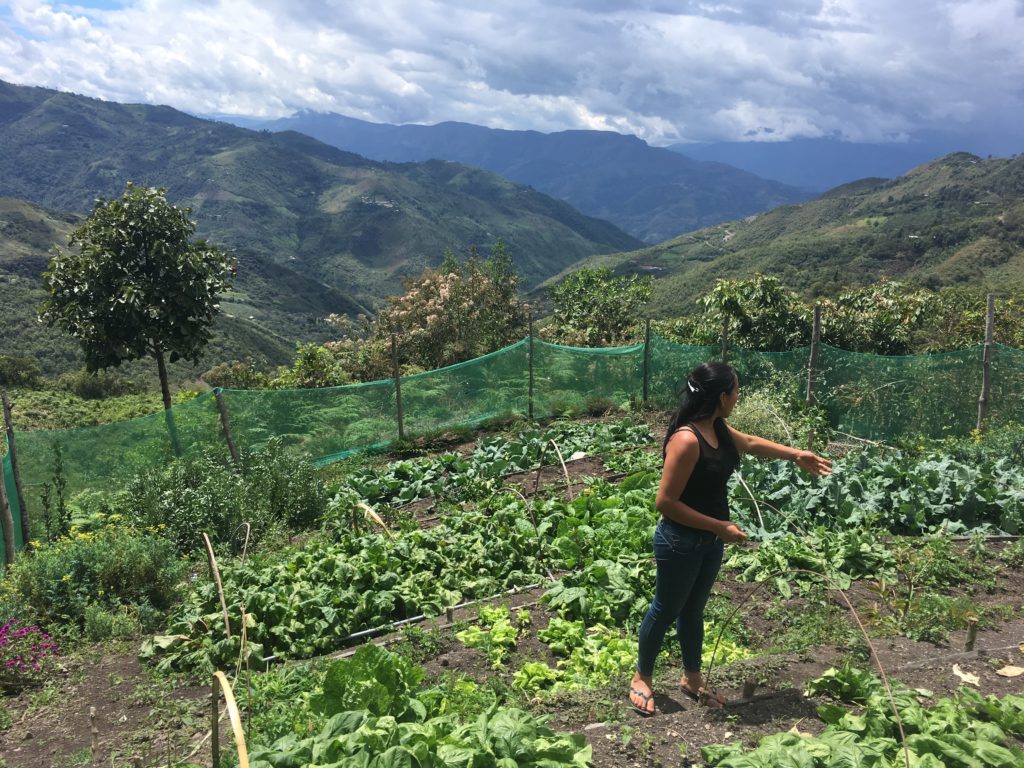 There is consistent excitement on the horizon at Chirinos, and this year was no exception. They are undoubtedly one of the most well organized and progressive groups we work with in Peru. A major highlight is that 120 producer members now have official “secadores solares” or enclosed drying areas. Through a project funded by Incofin, the group set up models of solar dyers and were able to construct those for 120 members over the last 2 years, with funding left for 50 more members in 2018. These have made a huge improvement in quality and drying time, allowing Chirinos to begin exports a few weeks earlier, while also achieving higher cup scores throughout the harvest. In conjunction with Rikolto (a Belgian developmental NPO), Chirinos also launched their “Comite de Jovenes” or youth group. These are programs designed for youth (ages 18-25) to provide economic opportunities outside of coffee in their home communities, as well as to facilitate team building in the workplace. In the last several months, they have been working on activities such as cascara tea and homemade soaps with coffee! Finally, they have developed the “Escuela de lideres”, or leadership school with the objective of giving 1 person in each base association a directive role. The leader will learn each part of how the cooperative functions (such as accounting, commercialization, and HR) and bring that information back to their base to create a better understanding of the supply chain to producer members.

Next, we drove north to San José de Lourdes, home of the El Milagro Cooperative. El Milagro has been hard at work since their inception to increase productivity, quality and membership. They launched their coop in 2013 with 56 members, and over the last 5 years have increased to 156 socios for the 2018 season. Of those, 110 have FTO certification and the remaining 46 are Fair Trade certified and in transition to organic. El Milagro has producers with farms ranging from 1100-1900 masl. Coffees that reach 84 SCA points and above are all harvested above 1400 masl and are mostly planted with CR795, Caturra, Pache, and Typica. Roya has not been affecting farms as chronically as it was last year, but producers at lower altitudes are dealing with the coffee borer beetle, known as Broca in Latin America. Unfortunately, this is quite hard to deal with for organic farmers who are prohibited from using chemical pesticides. Instead, they are using environmentally friendly traps and regularly inspecting their crops to separate infected trees before it is too late. 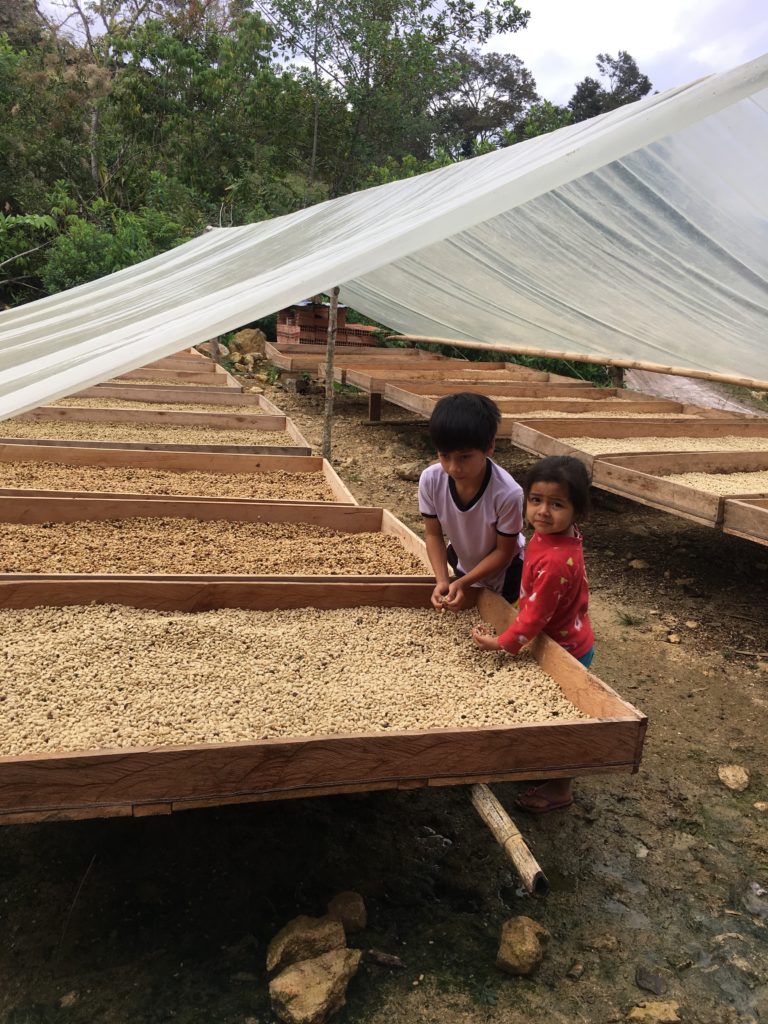 Example of a solar drying tent at the El Milagro Cooperative

El Milagro also has several programs for producer members, the primary being crop diversity. They are encouraging members to develop vegetable gardens and have supplied each producer with a packet of 10 different seeds to grow vegetables such as celery, onion, radish, and leafy greens. In addition, each household was given protective netting so that they can enclose the growing area to keep it safe from household pets and chickens. In conjunction with the municipality of San José de Lourdes, members below 1400 meters are receiving training to grow avocado and cocoa. El Milagro now has an official cacao nursery and they hope to export cacao in the coming years. Additionally, they have developed a reforestation program so that members can grow heavy woods such as Cedar and Eucalyptus within their coffee farms. The goal is to have 25% biodiversity in each farm in the next two years. Finally, all 156 members were given cement, tarps and nails and shown how to build solar dryers on their farms. While some will need revisions to be as effective as possible, every family now has one and should see improvements among drying time and cup quality.

Next, we traveled even farther north to visit our longtime partner, Cebicafen. This cooperative is situated just a few miles south of the Ecuador border, in the sleepy community of Namballe. With 180 current members, they hope to export 16 containers this year with 80% of those achieving cup scores of 82 SCA points or higher. In the past year, they have been working hard to streamline their quality control procedures as well as accurately report scores and yields to producer members, giving them a baseline for improvement. Grover Perez Zaquinaula, their quality control manager went through the Q certification training and exam earlier this year. He has one more test to pass before he becomes Q certified, and we are very excited for his achievement. Cebicafen is also working to improve drying at members’ farms, as well as transporting parchment to Jaén as fast as possible after QC cupping, where dryer and warmer temperatures are more common. 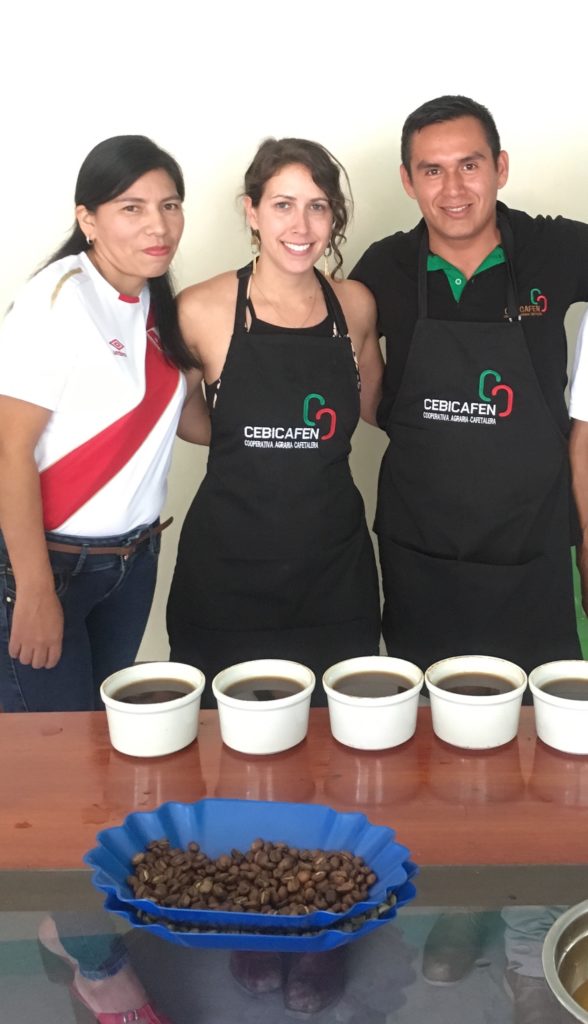 We concluded our trip with Coinca, the Peruvian arm of Neumann Kaffee Gruppe (of which Atlas is the newest member company). Coinca is responsible for sourcing, milling and exporting coffees from throughout the country. Their main offices are located in Lima, while the dry mill and central cupping facility is located just outside Jaén. The Jaén facility was impeccably clean, organized and efficient. Coinca offers coffee in all shapes and sizes, focusing on container volume for standard and certified coffees, while more recently also providing access to high quality single producer micro-lots. Since joining the NKG family, we have come to rely on Coinca to provide us with the most up to date happenings in the Peruvian specialty coffee market sector. 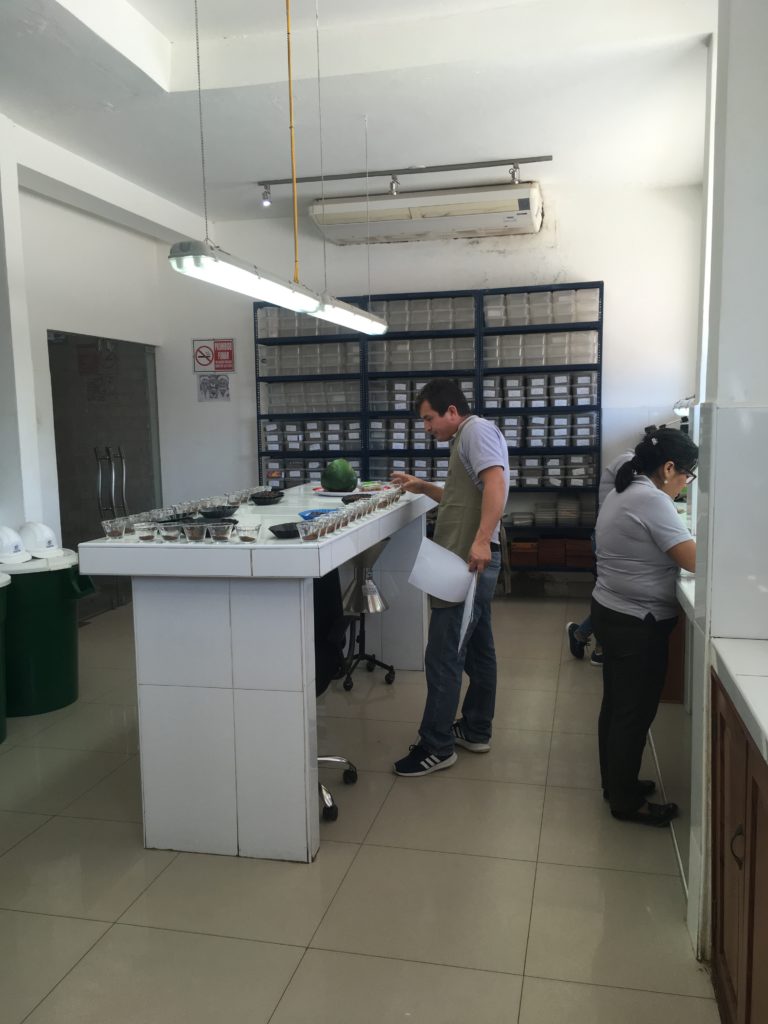