In September 2022, we returned to Peru for the first time since 2019. We were extremely eager to see our producer partners in person again after a long hiatus. We spent time with both new and long-term partners in the regions of Cajamarca, Junín, and Cusco.

While the logistics situation has been a global challenge, Peru has had an especially tough time with exports, internal pricing, and an overestimated crop. For the past two years, the ports have remained slowed and congested, and nearly all exporters still struggle to get coffee out of the country on time. This is due to a reduction in steamship lines (SSLs) leaving from the ports and SSLs rolling confirmed bookings three to four times per container. Additionally, the 2022 crop was approximately 20-25% below the initially estimated volume, leaving many exporters and cooperatives short. Finally, late and delayed shipments cause late payments to producers, which has affected cooperatives' ability to buy coffee locally to fulfill future contracts.

While it seems no one has been spared from the issues above, quality has been excellent throughout 2022. We are confident that all our contracts will be fulfilled, although many shipped later than anticipated. 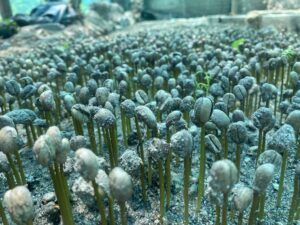 We began our trip by visiting several cooperatives through a new USAID project with the Central Café & Cacao del Peru. The project aims to strengthen the supply chain of certified specialty coffee from cooperatives in the regions of Junín, Cusco, and Puno using a climate-smart agricultural approach. The extension program of the project will allow producers to rehabilitate their plantations, use high-quality varieties suited for the area, increase productivity, and diversify with other crops. Over five years, Atlas has committed to purchasing several full containers from several groups involved with this project. There are 11 cooperatives engaged in the program, and we are currently working with two of those, ACPC Pichanaki in Junín and CAC Huadquiña in Cusco.

Our first stop was to visit ACPC Pichanaki, founded in 2000 with just 39 members. Today, the association has grown to nearly 350 producers with a total production area of 2600+ hectares, primarily growing Caturra, Catimor, Bourbon, Typica, and Pache. On average, producers have six hectares of coffee-growing land, which is about two to three times what we typically see in the northern part of the country. Due to the geographic location, Pichanaki begins the harvest in April and usually concludes in September. In addition to coffee, producer members also grow ginger, citrus fruits, plantains, yucca, and cacao. Although quality has been good in 2022, Pichanaki has challenges. In addition to pandemic difficulties, Roya has been incredibly aggressive this year, and not even rust-resistant varieties like Catimor have been pardoned. Another challenge has been the high cost of manual labor. Historically, pickers and agricultural workers were paid an average of 40 soles per day. In 2022, the price rose to 85 soles per day, and many small producers could not afford these high labor costs. Finally, in this area, it was believed that ginger was a natural antidote to COVID-19. During the pandemic, producers planted an estimated 10,000 hectares of ginger, most of which was exported to the United States and Europe. Because ginger was fetching a higher price than coffee and required less input and labor, many producers stopped tending to their coffee farms. Once the pandemic restrictions became less strict, the demand for ginger calmed, and producers were forced to return to coffee again. 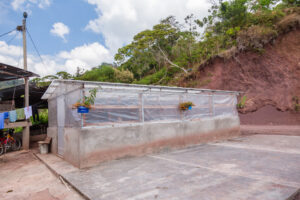 Next, we traveled a bit further south to the district of Santa Teresa in Cusco to visit CAC Huadquiña. Founded more than 50 years ago in 1964, Huadquiña is among the first established cooperatives in Peru. CAC Huadquiña is unique because they are the only coffee-producing group in the country with permission to use the Machu Picchu denomination of origin. The UNESCO World Heritage site can be reached by train, accessed just a short drive from Santa Teresa. Today they have 325 members, 30% of whom are women. The average member has five hectares of land, most of which is coffee, although some producers also intercrop with avocado and passionfruit. The average production yields 20qq/hectare with a goal of 30qq/hectare. Geisha, Bourbon, Typica, and Catimor are popular varieties in this area. The average age of a producer here is 57 years, so the cooperative is dedicated to creating opportunities for youth participation through competitions, barista training, quality control training, agricultural assistance, and coffee ecotourism.

Through the program with Central Café & Cacao del Peru, eight Huadquiña producers have gone through the Q Level 1 Processing course. They hope to put 30 more producers through the program this year, nearly 10% of their total members. They use educational material from SCA and CQI to teach producer members better processing techniques. Additionally, two young women from the community (one who will soon receive her Q Grader Certification) manage the quality control laboratory, and they do a fantastic job. The cooperative also built a beautiful centralized wet mill, where approximately 30-40% of the total volume is processed. In 2022 and 2021, Huadquiña won first and second place in the Peru Golden Cup competition for the category of micro-lot and first place in the category of full container. The group produces roughly 25 containers, but only five are imported into the United States. Atlas purchased two containers this year that will arrive in 2023, and we are excited about what will come with this unique group. 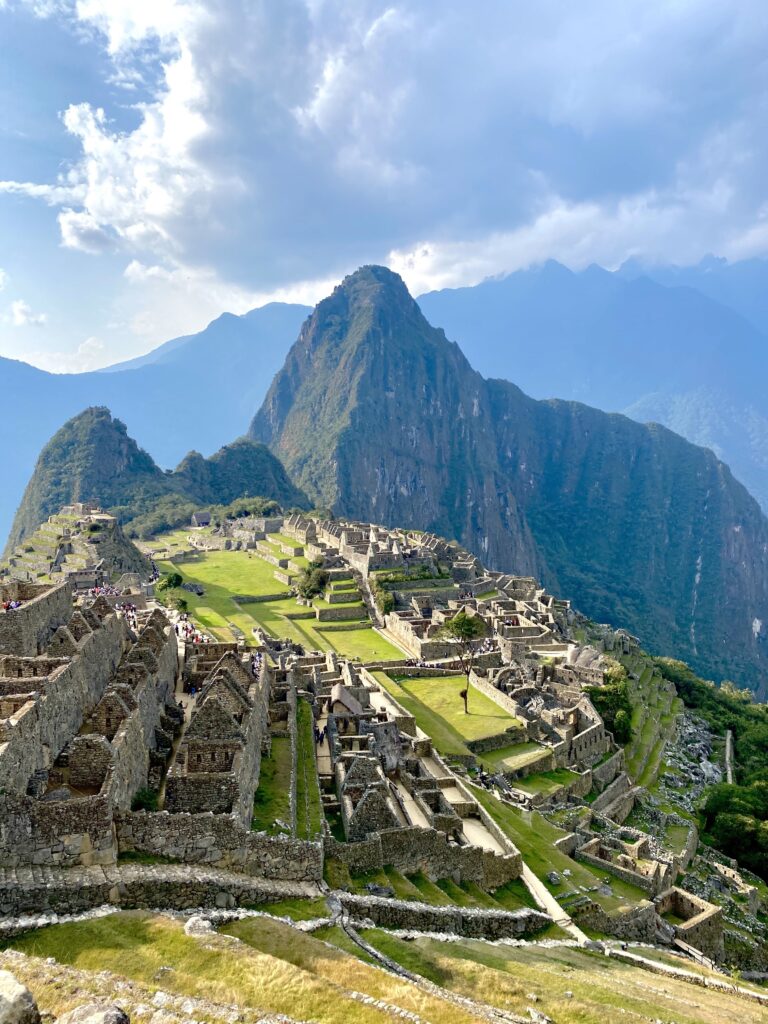 We then flew north to Cajamarca to visit some of our longer-term relationships in Jaén, beginning with El Milagro, located in the San Jose de Lourdes, above the Rio Chinchipe. We've been working with El Milagro since 2010, and they have been growing in volume and improving in quality ever since. El Milagro has been difficult to reach due to the lack of local infrastructure, but a long-awaited bridge finally opened during the pandemic. This has made accessing San Jose de Lourdes a breeze, and more importantly, it has allowed the community to transport coffee much more quickly and safely to the dry mill and onto the port. El Milagro has 265 producer members, each with an average of three hectares of land. This harvest year, they plan to export 40 containers. In 202o, El Milagro completed the construction of a new warehouse which allowed them to store 4500 qq of parchment. In addition, this warehouse houses the quality control laboratory and green analysis area. Because the new warehouse is more accessible, producers can easily visit, sell their parchment, and cup their coffee. 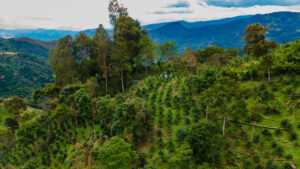 The volatility of the local coffee price has incentivized El Milagro to develop income diversification projects. Currently, they are focused on small-scale tilapia farms and cuy (guinea pig) nurseries. The tilapia is a new project developed over the summer of 2022, using Fair Trade premiums. It requires little material and inversion, and the fish can be sold locally or used for internal consumption. Currently, ten producers have built their own tilapia farms, and the cooperative is training many more members. The cuy nursery is a much larger project, and El Milagro expects this to be a game changer in the community. Cuy is a delicacy in Jaén, as it is the most nutrient-dense meat to which most people have access. Jaén has a massive demand for cuy, and it's estimated that the city consumes an average of 10,000 cuy per week. The sale of one animal can fetch an incredible price of $10 USD, which brings in a profit of $6 USD to the producer. Cooperative members can buy cuy at a discount from the nursery, and through education, they can begin to raise their own. For dedicated producers, one week of cuy sales is equivalent to a full year of income from coffee production.

Additionally, El Milagro began experimenting with natural and honey-processed coffee, and they hope to expand on these experiments. They aim to offer a full container volume of special processes in the next several years. We look forward to bringing these in when they become available! 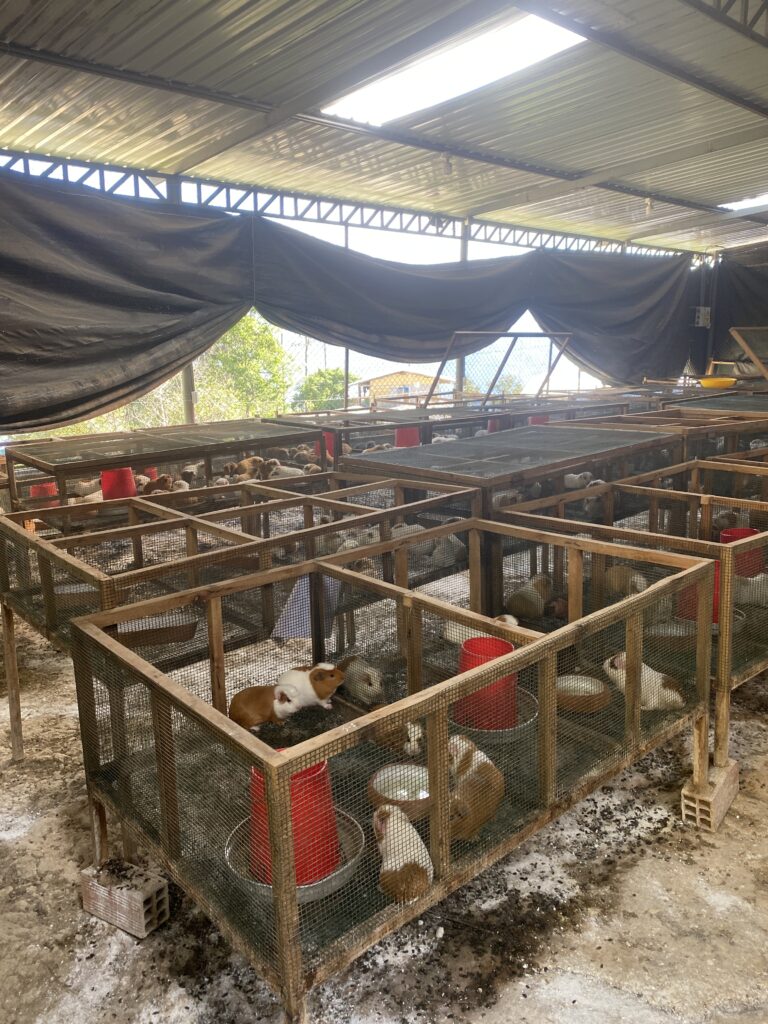 We ended our trip with a visit to La Prosperidad de Chirinos, located outside of Jaén. We've been working with Chirinos since 2015 and are always impressed with their organization and dedication to quality and innovation. Founded in 1968, Chirinos is one of the first established cooperatives in the country, and they have been going strong ever since. They currently have 817 producer members (214 are women), each with an average of four to five hectares of land. In 2022, they planned to export 105 containers. Chirinos is constantly pushing the boundaries, and they are committed to learning and growth. Since our last visit, the cooperative has developed an in-depth tracking system that follows coffee from each producer's farm until it leaves the FOB port. Until recently, much of that data was manually tracked with paperwork. This proprietary software system has immensely helped manage information and empower farmers to work toward better yields and higher quality. Most producers will deliver coffee to the cooperative several times throughout the harvest and are paid 70% of the coffee's value upon delivery. The remaining amount will be paid after the crop has concluded. In addition, members have access to small loans with 0% interest and larger loans with interest of 3-4%, which is quite competitive. Chirinos also offers transportation to members to assist in bringing coffee from the farms to the base cooperative. The truck runs daily and can hold 100 qq of parchment. Once a producer is ready to sell their coffee, they call the cooperative to schedule their pickup.

Since our last visit, Chirinos has expanded their organic fertilization operation (called Pacha Kushi). They make all fertilizer on-site at the cooperative, and farmers can buy the product at a discount. Any remaining fertilizer is sold locally. Pacha Kushi is made from the excrement of pigs, cows, and goats and is mixed with coffee pulp, micro-organisms, and phosphorous. The product is ready in about 30 days through terracing and constant mixing. The 2022 target production is 10,000 50 kg bags. A producer with one hectare of land uses five to six bags per application three times yearly. By the year 2025, Chirinos expects to produce enough fertilizer for every member of the cooperative. 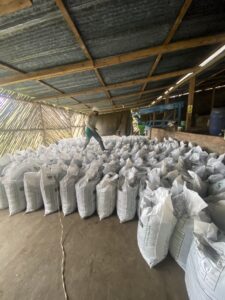 Finally, Chirinos introduced a women-produced coffee program in 2022 to empower female producers to diversify their income. Through a women's committee, females participate in activities such as avocado production, pig rearing, weaving, and guinea pig farms. This allows them to generate income outside of coffee and become involved in leadership positions within the cooperative. Coffee produced by these women will be sold under the brand "Cosecha de Mujer" or "Women's Harvest." It highlights the hard work carried out by female members, not only growing coffee but also the familial work of food preparation, childcare, and animal husbandry. This year, the cooperative will have seven lots of women-produced coffee, and we are proud to showcase one of those. 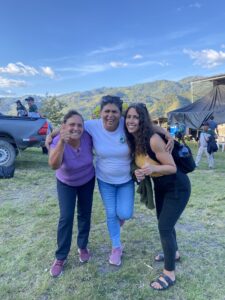 Follow along on social media for additional updates from these groups, and reach out to your rep at Atlas if you are interested in sourcing these coffees!